The Symbolism of Gloves in the 17th Century 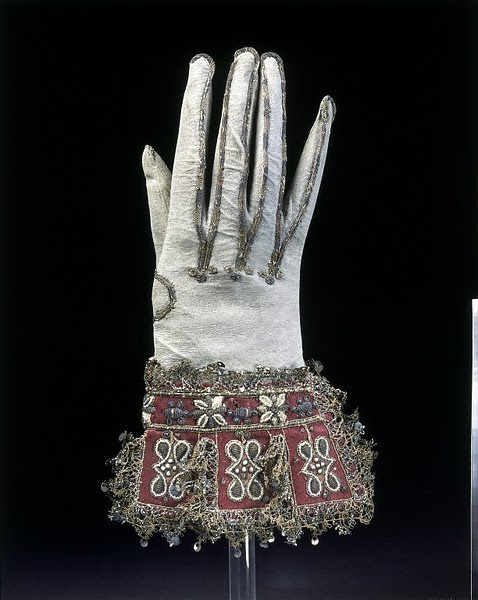 In The Gilded Lily, Jay Whitgift, the dashing but dangerous man-about-town, gives Ella, my feisty maid, a pair of gloves. As I researched the sort of gloves that Ella might have worn I re-connected with the idea that gloves often had a symbolic meaning. Their unmistakable form, and their manner of taking on an individual’s body shape so that they appear to be part of the person even when they’re off, must be why they have attained such social and psychological significance. And this is why I chose them as an intimate gift.

Gloves were made mostly of leather, suede or kidskin, which would stretch to fit the hand. Black ones were worn at funerals, and those attending would be expected to wear them. Relatives of the deceased would often supply black gloves for the poorer members of the congregation for fear of the shame of un-gloved mourners.

Yellow was worn for hunting and blood-sports, and white at balls or social occasions, and for the aristocracy who could afford servants to keep them clean. Hands dressed in with pale kid gloves looked manifestly unacquainted with work, and this was desirable for the upper classes.

In the 16th and 17th century  women would go to bed wearing gloves filled with marigold cream to whiten and soften their hands. Glovers often scented their gloves - common perfumes were cinnamon or cloves, but the most costly gloves were scented with musk, civet, ambergris, and spirit of roses.


Eighteenth-century Irish "chickenskin" gloves were even thinner and smoother than kid. They were cut from the skins of aborted calves, and so fine that they came folded into the shell of a walnut.
Margaret Visser – The Way We Are.
Not sure I like that idea, it sounds very grim!

As with a handshake, in the 17th century gloves meant faith in the transaction or confidence in the person, so transactions of land or property could be made by handing over the symbol of a glove.

The tradition of “throwing down the gauntlet”, has survived in language at least, where a knight might challenge another to a duel by casting a glove at his feet – the glove being a symbol of hand to hand combat. In my third novel, A Divided Inheritance, Zachary Deane is challenged to a duel in just this way.

Judges often used to wear gloves as a symbol that their hands were unsullied by the criminals they had jurisdiction over. Gloves "lined" with money were famous as formal bribes and judges and other high up members of society often received far too many pairs of gloves to use them all; for this reason, many fine specimens survive. These are often highly decorative, with gold braid, embroidery and sumptuous beading, as in this example. The poorer gloves, such as the ones Ella is given, that would be worn for warmth, rarely survive.
In the 16th and 17th centuries so much etiquette developed around them that men’s gloves in particular grew wider and more decorative as they were so often carried rather than worn. It was taboo to offer to shake a hand wearing gloves, or to accept a gift in a glove. Nor was it acceptable to remove them with the teeth. Approaching an altar in Church, men had to remove their gloves, and the right glove had to be removed when coming into the presence of a social superior as a mark of respect. The keeping on of your gloves indicated that you retained power by declining physical contact, whereas the removal meant you deferred to a higher position. Gloves were also to be put off when playing cards (to deter cheating, I suppose) or when eating.

From the symbolic use of gloves the custom grew up of presenting them to people of distinction on special occasions. For example, when Queen Elizabeth visited Cambridge in 1578 the vice chancellor offered her a 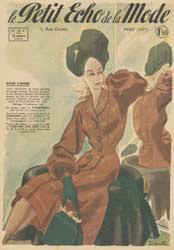 Up until quite recently women always carried matching handbags and gloves, like this picture from the 1940's - a style now only seen as a remnant at weddings, or with the royal family who, as befitting their perceived status, keep on their gloves in public.

In The Gilded Lily, Ella is delighted by her new gloves, which her sister Sadie dismisses scornfully as “trumpery”.

I originally wrote this post for  Grace Elliott's blog, thanks to her for allowing its second outing!

More information about the history of gloves can be found at http://www.goleathergloves.com/history-of-gloves.htm