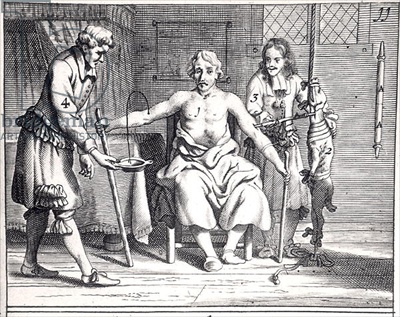 Recently I was writing a scene where a character needed a blood transfusion. You're probably saying, "Wait a minute, they didn't give transfusions during the 17th-century, did they?" As it turns out, the 1600s claimed the first known successful transfusions. In 1613, a doctor by the name of William Harvey formulated the theory of blood circulation. Before then, blood was assumed to wash back and forth throughout the body like a tide. He tested his theory on corpses, so therefore didn't perform the first transfusion on a live person.

Around 1639, Francis Potter used quills as needles and tubes for the purpose of transfusion, and in 1649, he attempted the process between two chickens. Frustrated by the attempt, he was only able to get 2-3 drops of blood at a time.

Several others, familiar with Harvey's writings, attempted the procedure with animals. Robert Boyle in the mid-1600s, injected dogs with "liquors," which were substances that could include ale, wine, and opium. As one might guess, these experiments usually ended poorly for the dogs in question.

Dr. Richard Lower is credited with the first animal to human transfusion. His technique led from the carotid artery to a vein. However, the transfusion failed because the blood clotted in the silver tubing he used for the purpose. Nearly a year later, Lower was successful in transfusing a man from a sheep with his technique.

Meanwhile in France, Dr. Jean Baptiste-Denys was performing similar experiments. The people that were transfused with lamb's blood had severe reactions, which we now know happens if a person receives the wrong blood type. Denys transfused a couple of people with lamb's blood, and they survived, most likely due to the fact that they had received too little blood to get an allergic reaction. Another man, who received a transfusion, died after the second one. In 1668, Denys once again attempted a transfusion between a calf and a man with what appeared no outward effects. Two days later, he attempted to transfuse the man a second time, and "as soon as the blood entered his veins, he felt the heat along his arm..." The man survived, only to succumb after a third transfusion several months later.

As a result, the French parliament banned transfusions. The British parliament and Vatican followed suit soon after.

As for my character, since I have a time traveler involved, I was able to mix the scene using 17th-century equipment and early 20th-century knowledge.

Some of the most beautiful Royal Palaces lined the River Thames, and I have always wondered about the ‘lost’ ones; those that were left to become ruins, or destroyed long before photographs could tell us what they looked like. One of these is the castle which once stood between Richmond Green and the River Thames.

In Medieval times, Richmond Green was used for grazing sheep, archery, jousting tournaments and pageants. Now it is surrounded by Regency and Georgian houses which change hands for jaw slackening amounts, and where locals and dreamers sit at The Cricketers pub and pavement cafes to watch the cricket and attend fairs in the summer. Once these houses existed to serve the Royal Palace, and clues still exist as to its former splendour in the names of the streets that radiate on the west side of the green, like ‘Old Palace Gate’, ‘Friars Lane’, ‘Old Palace Yard’, and ‘The Wardrobe’. The only remaining section is a red-brick gatehouse which still bears Henry VII’s coat of arms.

The manor of Shene contained a manor house since Henry I’s time, held by a Norman knight before being returned to Royal hands. Edward II owned it, and after his deposition by Queen Isabella it reverted to her. After her death, Edward III turned the manor house into the first ‘Shene Palace’, where he died in 1377.

His grandson, Richard II came to the throne as a boy, and while still a teenager, married Anne of Bohemia. Shene was their favourite home and when Anne died of the plague at the age of 27, Richard, stricken with grief, ‘caused it to be thrown down and defaced.’

Henry V began construction on a new castle-like building, though the work halted at his death in 1422. Building resumed for the new king, though Henry VI was then only 8 years old when he was crowned.

Edward IV gave Shene Manor to his queen, Elizabeth Woodville, who handed it over to the new Henry VII after his victory over Richard III, who subsequently married his daughter, Princess Elizabeth of York.

The wooden buildings were destroyed by fire when the king and his court were there celebrating Christmas in 1497. In 1500, the name of Shene was changed to Richmond, in honour of the title, Earl of Richmond, which Henry VII held when he won at Bosworth Field.

Built of white stone, the new palace had octagonal or round towers capped with pepper-pot domes that bore delicate strap work and weather vanes. Of three stories set in a rectangular block with twelve rooms on each floor round an internal court. This area contained staterooms and private royal apartments, while the ground floor was entirely given over to accommodation for palace officials.

A bridge over the moat, surviving from Edward III’s time, linked the Privy Lodgings to a central courtyard some 65 feet square, flanked by the Great Hall and the Chapel and with a water fountain at its centre. The Great Hall had a buttery beneath, the Chapel ceiling was of chequered timber and plaster decorated with roses and portcullis badges, underneath which were extensive wine cellars.

The middle gate opened into the Great Court, turreted and adorned with stone figures of two trumpeters, and to the east lay the palace wardrobe where soft furnishings were stored. There was also a moat, a Great Orchard, public and private kitchens and a Library.  The palace gardens were encircled by two-storey galleries, open at ground level and enclosed above, where the court could walk, play games, admire the gardens, watch the tennis.

Richmond Palace became a showplace of the kingdom, and the scene of the wedding celebrations of Henry VII’s eldest son, Prince Arthur to Catherine of Aragon, and the betrothal of Princess Margaret to King James of Scotland in 1503.

Henry VII died at Richmond in 1509, and the following year, his son, Henry VIII married his brother’s widow, Catherine of Aragon. In 1510 Catherine gave birth to a son, Henry, at Richmond, whose lavish christening celebrations had barely finished, when the baby died a month later.


Henry VIII’s jealousy of Wolsey’s palace at Hampton Court led to him confiscating Hampton and giving Wolsey Richmond in exchange. Richmond became home to Mary Tudor, who stayed for a few months before being moved to Hatfield House. Anne of Cleves then received Richmond as part of her divorce settlement from Henry VIII.

In 1554, when Queen Mary I married Philip II of Spain, Richmond was where they spent their honeymoon, and within a year, Mary had imprisoned her sister Elizabeth there.

Queen Elizabeth was particularly fond of Richmond as a winter home – and loved to hunt stag in the "Newe Parke of Richmonde" (now the Old Deer Park.] summoned companies of players from London to perform plays – including William Shakespeare’s, and died there in 1603.

James I gave Richmond to his son, Henry Prince of Wales, as a country seat, but before any refurbishment could be done, Henry died and it passed to Prince Charles, who began his extensive art collection, storing it at Richmond.

In 1625, King Charles I bought his court to Richmond to escape the plague in London, and established Richmond Park, using the palace as a home for the royal children until the Civil War.

After Charles I’s execution, the Commonwealth Parliament demolished the Chapel, Hall and Privy Lodgings and sold off the stone, though left the brick buildings of the outer ranges intact.

By the restoration of Charles II in 1660, only the brick buildings and the Middle Gate were left. The palace became the property of the Duke of York (the future James II) and his daughters, Mary and Anne grew up there. Their only surviving half-brother, Prince James Edward (the ‘Old Pretender’) was nursed at Richmond, but the restoration work, begun under the auspices of Christopher Wren, ceased in the revolution of 1688 when James II fled to France.

The surviving buildings were leased out, and in 1702, ‘Trumpeters’ House’ was built, replacing the Middle Gate where two statues of trumpeters stood. These were followed by ‘Old Court House’ and ‘Wentworth in 1705-7.
The front of The Wardrobe still shows Tudor brickwork as does the Gate House. ‘Maids of Honour Row’ built in 1724 is a uniform terrace built for the maids of honour of Caroline of Anspach, the wife of George II. These replaced most of the buildings facing the Green in 1724-5 and the majority of the house now called ‘Old Palace’ was rebuilt in about 1740.

Traces of the elaborate gardens are still there, having been incorporated into private residences, but the view from the river is still beautiful and as you pass in a barge, and squint a little, maybe you can still see the ‘pepper pots’ and turrets of the old palace where kings and queens once lived.
Posted by Anita Davison