At fourteen, he was brought to Whitehall and treated like the heir to the throne He reputedly had an affair with Barbara Villiers before his father married him to Anna Scott, Duchess of Buccleuch, whose name he adopted.

Having been exiled to the continent for his part in the Popish Plot in 1683, Monmouth returned to England after his father’s death with eighty men intent on claiming the throne for a Protestant Monarchy. His march through the West country gathered 6,000 supporters at one point and he declared himself King in Taunton Market Place.

James II, Monmouth’s uncle sent John Churchill down to Somerset to rout the rebels and Monmouth’s army was defeated at Sedgemoor. Monmouth fled, but was caught and executed on 15th July 1685 at the age of 36. 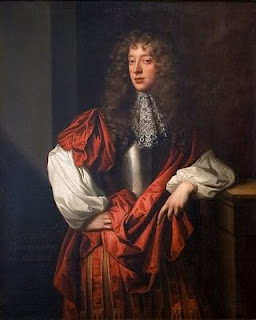 A wit and poet at the court of Charles II, was quoted:

"the wildest and most fantastical odd man alive."

To help mend his depleted finances, the 18 year old Rochester abducted the heiress, Elizabeth Malet, snatching her from a coach from under the nose of her guardian, Lord Hawley. Rochester was pursued, arrested, and briefly imprisoned in the Tower of London, before begging and receiving the king's forgiveness. Shortly after her rescue, Elizabeth rejected other more wealthy suitors and married Rochester on January 29, 1667.

During the years that followed, the young earl lived a double life: at Adderbury, his country house in Oxfordshire, he enjoyed the forgiveness of his wife; at court he pursued a free-wheeling, scandalous life. Elizabeth Barry was not an obvious choice as a mistress. Her stage début in 1675 was unimpressive, and was said to be quite ugly. One wit wrote of her that she was,
'The finest woman in the world upon the stage and the ugliest woman oft on't.'

In 1677 Elizabeth gave birth to his daughter, also called Elizabeth. The affair ended and Rochester took his baby daughter out of Barry's care, but she died at about the age of 12. Rochester returned to his family and they spent a peaceful few years together, away from the court after his many years of over-indulgence. Husband and wife died within a year of each other in 1680 and 1681. During his last months, with his health in decline, Rochester developed an interest in philosophy and religion with Gilbert Burnet, royal chaplain and later Bishop of Salisbury. Rochester, at age 33, was a physical wreck. He had, in the words of the famous 18th century critic Dr. Samuel Johnson,
'Blazed out his youth and health in lavish voluptuousness'

When his son Charles, the 3rd earl, died on the 12th of November 1681, his titles became extinct.
Posted by Anita Davison 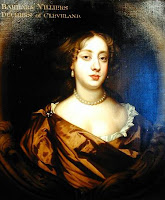 Pepys was enthralled by her beauty but, like others of the times, feared her impact on King Charles II to be far too great for the good of England.
While walking one day Pepys finds himself in the Privy-garden where he “saw the finest smocks and linnen petticoats of my Lady Castlemaine’s, laced with rich lace at the bottom, that ever I saw; and did me good to look upon them”. In spite of her beauty, upon her separation from her husband, Pepys admits “I know well enough she is a whore”.

A Viscount's daughter, Barbara was already married when she met Charles soon after his return to England in 1660. When Charles' future queen, Catherine of Braganza arrived from Portugal in 1662, Barbara appears to have been heavily pregnant by him. She gave birth to a son on 18 June, five weeks after Catherine's arrival. That same day, the Queen visited Barbara in her apartment at Hampton Court, and was so shocked to see the newborn child that she threw a fit and had to be carried out.

Although she was never faithful to her royal lover, the King used to visit Barbara four nights a week at her apartments in Whitehall. When her second son was born in 1663, Charles denied paternity but nevertheless gave Barbara lavish Christmas presents the same year. When she was expecting another child in 1667, Barbara swore that if he denied paternity again, she would dash the infant's brains out. Barbara's power over Charles was such that he went down on his knees to be 'pardoned' for his very well-founded suspicions.

Barbara's demands were so great, her temper so fierce and her infidelities so brazen that Charles tired of her. When Barbara announced she had converted to Catholicism, this was the ideal excuse to have her removed from court. She left for Paris in the spring of 1677, to embark on more liaisons.
Posted by Anita Davison

Alison Stuart  The Kings Man - By The Sword - Tower of Tales 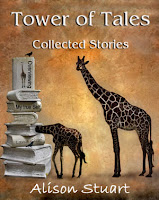 Mistress of The Sun - The Josephine B Trilogy

English Civil War and The Protectorate
A comprehensive website with detailed accounts of the causes, effects, the Cavaliers, Roundheads and Battles of this period of English History

History and Women
Wonderful, Wanton, and Wild women of history

Executed Today
A chronological list of executions throughout history