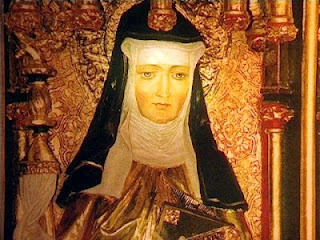 On May 10, 2012, Pope Benedict XVI formally recognized Hildegard von Bingen as a saint.


If Hildegard has long been venerated as a saint with her own feast day of September 17, why  did it take the Vatican so long to canonize her? Why Hildegard and why now?

The first attempt to canonize Hildegard began in 1233, but failed as over fifty years had passed since her death and most of the witnesses and beneficiaries of her reported miracles were deceased. Her theological writings were deemed too dense and difficult for subsequent generations to understand and soon fell into obscurity, as did her music.

According Barbara Newman, Hildegard was remembered mainly as an apocalyptic prophet. But in the age of Enlightenment, prophets and mystics went out of fashion. Hildegard was dismissed as a hysteric and even her authorship of her own work was disputed. Pundits began to suggest her books had been written by a man.

Newman states that Hildegard’s contemporary rehabilitation and resurgence was due mainly to the tireless efforts of the nuns at Saint Hildegard Abbey. In 1956 Marianne Schrader and Adelgundis Führkötter, OSB, published a carefully documented study that proved the authenticity of Hildegard’s authorship. Their research provides the foundation of all subsequent Hildegard scholarship.

In the 1980s, in the wake of a wider women’s spirituality movement, Hildegard’s star rose as seekers from diverse faith backgrounds embraced her as a foremother and role model. The artist Judy Chicago showcased Hildegard at her iconic feminist Dinner Party installation. Medievalists and theologians rediscovered Hildegard’s writings. New recordings of her sacred music hit the popular charts. The radical Dominican monk Matthew Fox adopted Hildegard as the figurehead of his creation-centered spirituality. Fox’s book Illuminations of Hildegard of Bingen remains one of the most accessible and popular books on the 12th century visionary. In 2009, German director Margarethe von Trotta made Hildegard the subject of her luminous film, Vision. And all the while, the sisters at Saint Hildegard Abbey were exerting their quiet pressure on Rome to get Hildegard the official endorsement they believed she deserved.

Pope John Paul II, who had canonized more saints than any previous pontiff, steadfastly ignored Hildegard’s burgeoning cult, possibly because he was repelled by her status as a feminist icon. Ironically it is his successor, Benedict XVI, one of the most conservative popes in recent history—who, as Cardinal Ratzinger, defrocked Matthew Fox—is finally giving Hildegard her due. Reportedly Joseph Ratzinger, a German, has long admired Hildegard.

I, for one, am heartened that Hildegard, the great polymath and powerfrau, is finally receiving this official  recognition. Her ethereal music, her philosophy of natural medicine, her transcendent visions, mandala-like illuminations, and her insights on the immanent divine in the natural world have made her icon to people all faith backgrounds. I can only hope her canonization and her upcoming elevation to Doctor of the Church will allow many more people to be inspired by her life and work.


My new book ILLUMINATIONS: A NOVEL OF HILDEGARD VON BINGEN will be published in October 2012 by Houghton Mifflin Harcourt.
Posted by Mary Sharratt