Family legend says I come from a long line of German carpenters [well OK, three] and that my grandfather fashioned the elaborate ornate woodwork that graces Victorian public houses throughout London. Some of these still exist, notably The Jamaica Wine House, a 19th century building with an oak-panelled bar, high partitions and ornate ceilings. I visited this pub recently, and although I have no evidence Grandad worked on this bar, the design is reminiscent of his style. 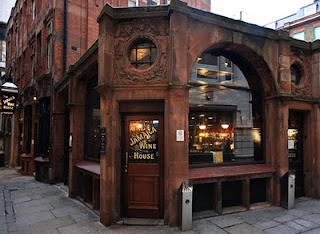 This brought me to my own area of interest, as The Jamaica Wine House was originally The Turks Head, London’s first coffee house that opened between 1650 and 1652.

Coffee is believed to have come to Britain around 100 years after the first coffee-houses opened in Turkey. However, the Elizabethan essayist Francis Bacon, in his Historia Vitae et Mortis, published in 1605, warned the public against the dangerous properties of coffee. Thus the implication being that some contact existed prior to the establishing of coffee-houses. A man named Pasqua Rosee arrived from Ottoman Smyrna with his employer, a Mr Daniel Edwards, a “Turkey merchant”. He fell out with Mr Edwards and teaming up with his former employer’s coachman, they established a coffee-house in St Michael’s Alley. Set amongst a labyrinth of medieval courts and alleys off Cornhill and Lombard Street, this establishment was known by some as “The Turk’s Head” It opened between 1650 and 1652, and Samuel Pepys is reputed to be a customer. 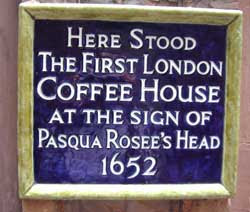 By 1660, there were 500 coffeehouses in London alone, although various sources claim this number is between 200 and 2,000. What with the Great Fire of 1666 having destroyed many and with no existing records, the numbers cannot be verified.

Grouped mainly around the Royal Exchange, Custom House, Post-Houses and the court, these all-male preserves apart from the lady at the counter, admitted anyone who laid down a penny at the bar, or a token stamped with the emblem of the establishment, as an entrance fee.

They provided a gathering place to exchange news, gossip and conduct business in a sober environment, a genteel atmosphere that contrasted with public houses attended in the evenings where people would go for entertainment. 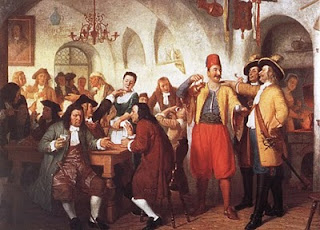 Some coffee-houses served tobacco and hookah pipes, chocolate and a range of sherbets, which, according to the Mercurius Publicus (12-19 March 1662), were “made in Turkie, of lemons, roses, and violets perfumed”. Advertisements found in pamphlets and newspapers of the time refer to coffee as “the right Turkie berry”, which implies its introduction by way of the Ottomans, or Mediterranean trading routes.


China Tea was also served, and negro boys seeking refuge from the West Indies was sometimes employed a star attraction to customers. The signs outside, and the coffee tokens used to gain entry, were often be-turbaned. Of the most famous are: 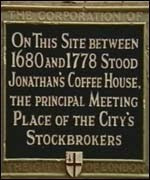 Jonathon's Coffee House in Change Alley: a favourite meeting place for stockbrokers and eventually became the London Stock Exchange.
Edward Lloyd's Coffee House: a haunt for ship owners and marine insurers and became Lloyd's of London
The “Great Turk Coffee House”, also known as “Morat Ye Great”, in Exchange Alley in 1662, apparently boasted a bust of “Sultan Almurath IV”, “the most detestable tyrant that ever ruled the Ottoman Empire”. 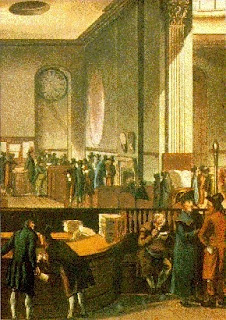 Coffee-houses became venues for artists and writers to congregate and hold business meetings. Freemasons had their Lodge meetings in them. Some, due to their sea-born connections, set up a postal system for collecting and carrying letters abroad, which annoyed the struggling Postal Service no end. Some gained a reputation for being meeting places for religious or political dissidents, and hence at one point in the mid to late seventeenth century were “under suspicion as being centres of intrigue and treasonable-talk”.

Intellectuals and scientists used them to launch their latest projects to the Press; and the sea-born trading companies such as the East India Company, the African Company and the Levant Company all made use of coffee-houses, often to store their records. Newspapers, journals and pamphlets were circulated. They also went hand in hand with Turkish baths, which were also becoming a popular London feature. Whatever the local ethos of the area, whether it be one of literary prowess or ill-repute, the coffee-house became the main focal-point for all of this activity.

Many believed coffee to have several medicinal properties in this period. A 1661 tract entitled "A character of coffee and coffee-houses", states:

'Tis extolled for drying up the Crudities of the Stomack, and for expelling Fumes out of the Head. Excellent Berry! which can cleanse the English-man's Stomak of Flegm, and expel Giddinesse out of his Head. '

Not everyone was in favour of coffee, however and in 1674 the anonymous, "Women's Petition Against Coffee" declared:

'...the Excessive Use of that Newfangled, Abominable, Heathenish Liquor called COFFEE [...] has [...] Eunucht our Husbands, and Crippled our more kind Gallants, that they are become as Impotent, as Age.'

In 1675, Charles II 'called for the suppression of all coffee-houses in London as being places where the disaffected met, and spread scandalous reports concerning the conduct of his Majesty and his Ministers'. The uproar that followed forced King Charles to cancel this edict.
Posted by Anita Davison