While researching my historical biography of Elizabeth Murray, it struck me how many 17th century aristocratic portrait paintings included a black child servant.  It made me wonder where these children came from, how they were viewed and treated in society, and what happened to them once they had outgrown being a trophy for their rich masters.

The earliest mention of Africans living in England seems to be 250AD, when Rome sent a contingent of black legionnaires to stand guard on Hadrian’s Wall.

There is no evidence that these men stayed in Britannia, and when the Romans finally withdrew in the fifth century, the Germanic tribes replaced them and become the English.

The Close Rolls of King John of July 1205, gives a ‘mandate to the constable of Northampton to retain Peter the Saracen, the maker of crossbows for the King’s service, and allow him 9 pence a day’.

During the Middle Ages, the few black faces in Britain appeared to be entertainers linked to royal entourages. African drummers lived in Edinburgh in 1505, and in London, Henry VII and his son Henry VIII both employed a black trumpeter named John Blanke, ‘the blacke Trumpet’, at a wage of 8 pence per day. He was depicted in the painted roll of the 1511 Westminster Tournament, [below] held to celebrate the birth of a son to Catherine of Aragon, who had arrived from Spain in 1501, again with Africans in her entourage.

In 1540 Henry VIII employed a black diver to look for the wreck of the Mary Rose; but his name, and where he came from is unknown. In 1577 Elizabeth I issued an order for a ‘Garcon coate of white Taffeta, cut and lined with tincel, striped down with gold and silver … pointed with pynts and ribands’, for her ‘lytle Blackamore’.

In Elizabethan times, masks of Black faces were considered fashionable, worn in court society at  functions and pageants. Members of the aristocracy were also known to paint themselves black, as 'nigrost' or as 'black Mores'. The character of the Black Moor also featured often in plays, including those of Shakespeare, and London street names, such as Black Boy Court, off Long Acre, and Blackamoor's Alley in Wapping, was an indication that black people were not an unusual sight in the city.

In 1555 John Lok reached Ghana, with three ships and from a coastal village the captain of the John Evangelist kidnapped the son of the chief and three others, brought them to England to be trained as interpreters. ‘Whereof sum were taule and stronge men and coulde well agree with our meates and drynkes’ but the ‘colde and moyst aire doth somewhat offend them’.

One married an Englishwoman, although the birth of their dark-skinned child caused considerable astonishment. Until then it had been believed that Africans’skin colour was caused by the heat of the sun. In 1578 George Best wrote that ‘I myself have seene an Ethiopian as blacke as cole brought to England who taking a faire English woman to wife, begat a sonne in all respects as blacke as the father’.

Queen Elizabeth was not alone in having a black servant in her household; in April 1584 the Duke of Leicester’s household records mention of a 'Mr Rawles blackamoore, XXs’. Sir Robert Cecil had a ‘blackmoor seruant’; Sir John Hawkins’ black page boy was named Samuel.

The King of Morocco’s ambassador arrived in England with a retinue of fifteen ‘Moors’ in 1600, and given a warm reception by Elizabeth I. Nevertheless, they had trouble obtaining housing. When they did find accommodation, they lived alone and were ‘strangely attired and behavioured’, and reputedly slaughtered their own animals (presumably to fulfill religious requirements).

Francis Drake also had a black manservant called Diego, an enslaved man who defected from his Spanish masters during the raid by Drake on the town of Nombre de Dios. He became Drake’s valued aid and manservant advising him on the route taken by the Spanish carting gold and precious stones across the isthmus of Panama to Nombre de Dios. As a result, when Drake returned the following year, he was able to capture ‘the mule train laden with treasure’ and ship it to England, a cargo valued at £20,000.

Drake named a fort he built on an island in the Gulf of San Blas ‘Fort Diego’. Sadly, while stopping for provisions and water on Mocha Isle off the coast of Chile in November 1578, Diego and another crew member were killed by unfriendly islanders.

Walter Raleigh’s page boy, aged about ten, whom he had brought from what is now Guyana, was baptised Charles at St Luke’s church in Kensington in 1597. Raleigh had brought two black men from Guyana with him; one entered domestic service in London and the other waited on him during the early years of his imprisonment.

Unfortunately, this toleration eventually turned to fear of an increasing black population in London, which lead to Queen Elizabeth I issuing a royal proclamation to arrest and expel all "Negroes and blackamores" from her kingdom. I wonder if her own little blackamoor was included in this edict?


This charming painting [Left]  is by Sir Peter Lely, principal painter to Charles II of Lady Charlotte Fitzroy, aged eight, the illegitimate daughter of Charles II and his mistress, Barbara Palmer, with her Indian page.

Dr Samuel Johnson's servant and valet, Francis Barber, attended a grammar school in Bishop's Stortford. He left Francis a £70 annuity in his will, and refused to let him go out to buy food for his cat, as he felt; 'it was not good to employ human beings in the service of animals'.

This portrait of a black servant [below] is a sensitive characterisation of a servant as an individual. The young boy was clearly a favoured companion, shown by the fact that he is cup bearer, trusted and loved by his master’s lapdog. 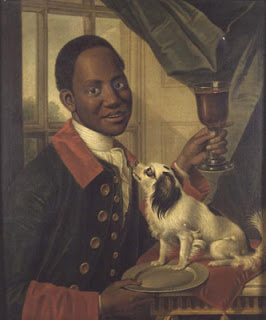 When wealthy plantation owners sent their children to schools in England, they would sometimes send slaves to accompany them. The legal status of these immigrants was vague because their arrival was tied to their English owner and their freedom depended upon whether or not they were Christian. The question being that if a man brought to a free country could be anything but free - however economics always won over moral arguments and the trade grew.

When these young boys reached their mid to late teens, they were sent back to Barbados to labour in the sugar plantations; a cruel end to a life of comparative luxury as a lady’s errand boy.  However, some grew up in England and stayed here as their masters and mistresses grew fond of them, often educating them in music, drawing and literature.

Indian people were commonly referred to as 'black', and as a result, appear less frequently in the records, although they may well have been present in large numbers in Britain.

Pierre Mignard (1612-1695) in his portrait of Charles II's Mistress, Louise de Keroualle [below] shows the lady has the attributes of wealth and power: The pearls are symbols of purity, gold symbolises wealth and the black servant (with her slave collar) is a symbol of power.

The artists positioned black people on the edges or at the rear of their canvasses, from where they gaze wonderingly at their masters and mistresses. Often they were placed next to dogs and other domestic animals, existing as solitary mutes, aesthetic foils to their owners' economic fortunes.

They were often given Roman names, which accounts for the large number of Scipios, Plinys and Caesars buried in churchyards across the country. Anglicised names are rare and African names rarer still. Notices for runaway slaves were a common feature of local newspapers during this period.


Servants who ran away from their masters' houses were the subjects of lost-and-found ads in the press, and rewards sometimes offered for their return.  An advertisement for this house servant [below] was printed in a London newspaper in 1678.

He had been living in Covent Garden with his master Arnold Pigeon before he ran away. Described as wearing a livery coat, the reward for Africa's capture was 20 shillings, equivalent then to two months wages for a servant. It is likely that he was recaptured, as a young black boy alone in a city would not have stood much chance of evading his searchers. However there were instances of Black slaves escaping to "safe houses" throughout the time of slavery such as one known as " Jerusalem " in East London.

Not all Black people in England were slaves, many worked as sailors, trades people of all kinds and in some cases as businessmen or musicians. Black writers played a role in the anti-slavery movement in England and famous 18th Century activists like Olaudah Equiano and Ottobah Cugoano were pivotal to the movement in speaking and writing from their personal experience of the horrors of the trade.

After 1772, the continuation of slavery in Britain was a rarity and often likely to attract legal and social hostility. This change in attitude was illustrated by the Somerset case of 1772 in which Somerset, a fugitive enslaved African, brought a case against his owner who was attempting to force him to return to the West Indies. Lord Justice Mansfield * ruled that it would be illegal to remove Somerset from the country against his wishes. This ruling formed the beginning of a much wider campaign against slavery. 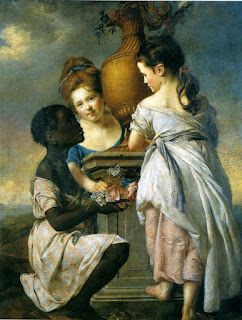 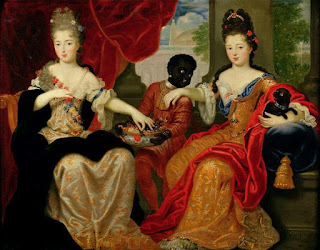 My favourite portrait is the one below of Dido Elizabeth Belle, and although 18th Century, and may not belong in this post, the story behind it is intriguing. Dido's beauty and personality comes through so well in this delightful painting in which she is in no way subservient to her cousin, Lady Elizabeth Murray.

Dido was the natural daughter of Sir John Lindsay, a British Navy captain on HMS Trent, a warship based in the West Indies where she was born. Little is known about Dido’s mother, apart from that her name was Maria Belle, but Lindsay was the nephew of William Murray, Lord Mansfield* the Lord Chief Justice [mentioned above]
Lord Mansfield and his wife were childless, so raised Dido at Kenwood House, Hampstead, along with her cousin, Lady Elizabeth Murray, whose mother had also died.

Dido’s status in the household was commented on by several visitors; one said that her great-uncle Lord Mansfield "called upon (her)…every minute for this and that, and showed the greatest attention to everything she said."

Dido would not dine with the rest of the family, especially if they had guests, but joined the ladies for coffee afterwards in the drawing-room. As she grew older, she took responsibility for the dairy and poultry yards at Kenwood, and she also helped Mansfield with his correspondence - an indication that she was fairly well educated and seemed to have been a loved but poor relation.

She received an allowance of £30 10s and was provided with pretty furniture, birthday and Christmas gifts and ass’s milk when she was ill. When Lord Mansfield died, he left Dido £500 in his will, and a £100 annuity, and officially confirmed her freedom.

Dido married a John Davinier in 1793 at St. George's, Hanover Square and had three sons: twins Charles and John, also baptized at St George's on 8 May 1795, and William Thomas, baptized there on the 26 January 1802.Dido Belle Davinier died in 1804 and was buried in St George's Fields, survived by her husband, who later remarried and had two more children.