Introduced by 17th Century French doctors, this garb was used all over Europe during outbreaks of the plague. One belief was that the disease was spread by birds, and the bird-like masks could draw the plague away from the patient and onto the doctor’s clothes, which in turn protected him from the 'bad air'. 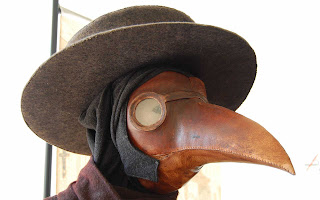 The beaked mask was made from bronze, its tip  filled with medicinal and aromatic herbs to ‘cleanse’ the bad air and cover up the stench of death and the  ruptured buboes. The doctor breathed through two small nose holes in the mask and placed garlic in his mouth and incense in his nose and ears.

The full-length gown was made out of thick material which was then covered with wax, with leather breeches, gloves and full length boots. Underneath the cloak, the doctor wore an elaborately prepared embroidered smock soaked in exotic preservative liqueurs, camphor oil and wax. Again, the idea was to isolate the doctor's body from plague-causing bad air. He also wore a wide brimmed leather hat which identified his status and carried a long staff to drive away anyone who came too close and help him communicate with the public as the elaborate headgear made speaking difficult, and the circles of glass or crystal set in the mask to protect the doctor’s eyes impeded their sight.

Caused by a bacillus called Yersinia pestis, symptoms of the plague are fever and swollen lymph nodes that appear in the armpit and groin. Contracted by either flea bites from carriers or inhaling airborne droplets containing the bacteria ejected by the victim in a cough or a sneeze. Bacteria can also enter through mucous membranes in the facial area.

Despite its macabre appearance, the clothing probably gave reasonable protection, and with herbs obstructing the breathing holes, the doctor limited his chances of exposure to airborne droplets containing the plague bacillus.

Plague bacillus could only survive for a short time outside the host, so there was a good chance the doctor would not become infected, although this protective shield was not sealed around the ankles, so did not keep out fleas.

The specter-like appearance of the costume was intentional, designed to communicate hopelessness. In a time when there when few people could read, the costume sent a powerful message: "Stay in your homes. There is plague in your neighbourhood. You may be dead in a few days." 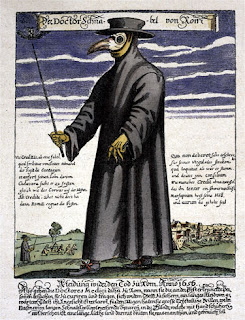 Types of Plague
Bubonic: is the most common. A flea bite causes 'buboes', large, inflamed and painful swellings in the lymph glands of the groin, armpits or neck. 60% of those infected died.
Septicaemic: Caused directly by flea bites, the bacilli entered the bloodstream directly and was invariably fatal. Death occurs within 24 hours.
Pneumonic: The most deadly and usually fatal. It does not require flea bites to spread, but the bacilli reach the lungs causing severe pneumonia. The bacilli are present in water droplets spread by coughs and on clothing and is thus highly contagious. Death occurs within 3 or 4 days.
In all three types, internal bleeding causes large bruises to appear on the skin – hence the plague's name in the 14th century, the Black Death.


The London Plague of 1665
Plague first appeared in Britain in 1348, and the islands were never totally free of the disease. In 1663, it ravaged Holland, and in 1665, London saw its first case in St Giles-in-the-Fields in April. By the end of May, 11 people had been infected. The summer was unseasonably hot and infection spread across the districts of Whitechapel, Westminster and Southwark.

An exodus began. The nobility left the city for their estates in the country, followed by the merchants, and the lawyers. The Inns of Court were deserted and most of the clergy suddenly decided they could best minister to their flocks from a distance. The College of Surgeons fled to the country, and the king and his court decamped to Salisbury. The poor, on the other hand, were forbidden to leave London. Seen as carriers of the disease, they were turned back at the boundaries.

By June, the roads were clogged with people desperate to escape London. The Lord Mayor responded by closing the gates to anyone who did not have a certificate of health: which became a currency more valuable than gold, and a thriving market in forgeries evolved.

The plague struck swiftly. Victims died within days, in agony from fevers and infected swellings. With no cure, drastic methods were used to contain it. ‘Plague Orders' decreed that victims should be shut into their houses and the doors were nailed shut and marked with a large red cross. Nurses were hired to take in food and carry out basic care, and guards were set on watch to make sure that the sick (or their families) did not escape.

In several cases, they carefully lowered a noose over the guard's head from an attic window and hung him, allowing them to break through the flimsy wattle and daub walls to escape. ‘Searchers’ were bribed to state that an area was clear of plague and that bodies collected for that night were from another street. In this way houses were not boarded up and people could leave. Therefore, while the plague map of London showed areas relatively free of infection, they may not have been.

To protect themselves, the trapped populace sniffed herbs and nosegays to drive out the bad air, fasted and prayed, while apothecaries did a brisk trade in preventative potions and religious and magical amulets. The Privy Council closed inns and lodging houses, and markets were cancelled and street stalls banned. 40,000 dogs and 80,000 cats were slaughtered. This last move actually made things worse, as the plague-carrying rats were now free of predators. By the end of July, more than 1,000 Londoners were dying each week.

Londoners who managed to escape the city were shunned, and letters were treated as if they were poisonous; scraped, heated, soaked, aired, and pressed flat to eliminate "pestilential matter". 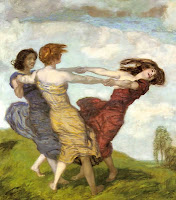 The death rate escalated to 6,000 per week in August, and not until February 1666 did King Charles II returned to the city. Official records of the time were patchy, but approximately 100,000 people perished in and around London.

A remnant of the Great Plague is the nursery rhyme ‘Ring-A-Ring-A-Roses’. The 'roses' refer to the red spots that appear over the buboes, and 'A-tishoo! A-tishoo! We all fall down!' recalls the violent coughing and swift death that accompanies pneumonic plague.
Posted by Anita Davison