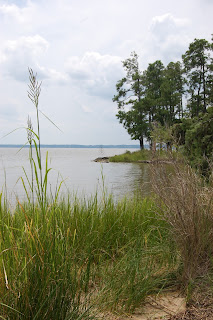 Recently, I visited Jamestown, the first English colony to survive on the North American continent. It had been several years since my last visit and very little had changed. One of the most interesting aspects wasn't a display or anything like that, but some archaeologists who were working on a dig. They took the time to talk with us. Unfortunately, we had missed their big find earlier in the week, when they had uncovered an intact horse skeleton. Also, unfortunately for them, they discovered the horse was from the 18th century and the Revolutionary War era, not the 17th century.

On my previous visit, I was most interested in the original Jamestown. Part of the original fort is already underwater, and it's said that with global warming, the rest will eventually follow suit. On this trip, my response was the same as on the previous occasion when I passed the Pocahontas statue. Let me just say, she appears to be attired more like she had belonged to a western plains Indian tribe rather than eastern woodland. But then, I believe the statue was made in the 1930s. It just seems to me a historic site could add a more accurate portrayal.

The newest exhibit was the reconstruction of Jane, the girl whose remains had been the first forensic evidence of cannibalism during the Starving Time. As I walked through many of the other exhibits, I grew saddened and disappointed. Nothing showed or explained the original colonization from the Paspahegh point of view. After all, the land belonged to them when the colonists first arrived. In fact, the exhibits seemed to go out of the way to perpetuate the myth of how primitive these people were. But then, the Paspahegh were annihilated because they had resisted English encroachment, and there are no descendants to tell their side of the story.

A few years later, paramount chief Opechancanough organized an attack against the colonists. By that time, Jamestown definitely belonged to the English. The exhibits claimed that a boy by the name of Chanco had saved Jamestown from certain annihilation. In reality, there is no historical evidence that Jamestown was ever threatened. I guess, even now, it may be too much to ask a historic site to tell both sides to a story.

Fortunately for me, my visit was to research how Jamestown had grown in the 1640s. During this time, much of the ship trade had been cut off from England due to the Civil War there. That was another fact that I didn't see mentioned, but the port remained busy because of trade from the Dutch, New England, and the West Indies. I walked the path that the colonists of the era would have walked, and it helped me see and feel what my characters in my upcoming book The Dreaming: Wind Talker would see.

Afterward, I traveled the island by car. Maybe someday I'll return and walk the island. Before leaving, I saw a large bird in a tree. Other observers said that it was a bald eagle. According to most indigenous people, the eagle is a sacred messenger spirit. In that regard, I know the Paspahegh would be pleased.

These days, the royals appear unable to keep anything secret, especially when reprehensible behaviour is concerned. Newspapers and social media eagerly jump on every snippet and make it public knowledge within hours. However, it seems the 17th Century royalty were no more effective in keeping their private affairs out of the pamphleteers hands.

George FitzRoy, 1st Duke of Northumberland was the youngest son of Charles II and Barbara Villiers, the Duchess of  Cleveland. John Evelyn, the diarist, who met him at dinner at Sir Stephen Fox's house, described him as "of all his Majesty's children the most accomplished and worth the owning," and is "extremely handsome and well shaped." Expansive praise indeed because Evelyn was equally kind towards Charles II elder son, the ill-fated James Scott Duke of Monmouth.

At the age of 21, George eloped with Katherine, the beautiful widow of Captain Thomas Lucy of Charlecote. The duchess was the mother of a small daughter, but had no dowry or rank, and an unsavoury reputation - although this third vice may or may not have been circulated so as to make George's reprehensible behaviour more acceptable..

George’s uncle, King James II was in negotiations for a wealthy wife for his nephew to a daughter of the Duke of Newcastle and was openly furious about the match. Repenting his elopement, George sought the help of his older brother, Henry, Duke of Grafton, another of Barbara's offspring, who advised him to divorce the blameless Katherine. Due to their papist leanings, divorce was impossible, so the two dukes kidnapped the bride, took her by barge from Chelsea to Gravesend, and there sailed for Flanders. At Ghent they placed her in a nunnery, and returned to England. Problem solved then?

King James, however, discovered their actions and sent a yacht to return the duchess to England, thus forcing his nephew to acknowledge her, and presented at Court.  Maybe the king’s conscience was bothering him, for he secretly married Ann Hyde in 1660 and was ready to repudiate her until his brother Charles II, insisting James acknowledge the marriage, and publicly received his wife.

It isn't recorded what Katherine thought about this treatment, but I hope George was reminded of it at regular intervals. The story was circulated amongst London society, and made into a satire - called "Ballad. The Widows and Maids." and was already being sung in taverns by the time Katherine was returned home.

Young widows and maids
Now hold up your heads,
There are men to be had for all uses.
But who could presage
That ever one age
Should be furnished with two Tom Lucys? [1]

No reason I see
Our Goodman [2] should be
So very much angry with her son;
For though her [3] estate
Be encumbered with debt,
She always was free of her person.

Since his grace would prefer
The poulterer's [4] heir
To the great match his uncle had made him,
T'were just if the King
Took away his blue string [5],
And sewed on two to lead him.

That the lady was sent
To a convent in Ghent
Was the counsel of kidnapper Grafton;
And we may foretell
That all will do well,
Since the rough blockhead 6 governs the soft one. [7]

King John [8], who once passed
For a coward, at last
Gave evident proof of his courage;
There's many a one
Scorns pistol and gun,
Would not venture on such a marriage [9].

Moll Hinton [10] best knows
Why Newburgh [11] keeps close,
But it need never trouble her conscience;
Tis duty to clap
That impertinent fop,
For then the town's free of his nonsense.

For one that loves peace
And would live at his ease,
Northampton [12] the best way has chosen;
Leaves courting the fair
To his uncle's care,
And the combating part to his cousin.

In Shrewsbury [13] we find
A generous mind
So kindly to live with his mother,
And never try yet
To revenge the sad fate
Of his father and only brother.

Since fighting we see
With some don't agree,
A witness the much safer post is,
And though Ford [14], Lord Grey,
In the field ran away,
He can charge in a court of justice.

'Tis pleasant to hear
An eminent peer [15]
Make whoring a case of conscience,
When 'tis so well known
His favor begun
By pimping to Portsmouth not long since.

It is plain case
The countess's [16] disgrace
The Catholic cause advances,
And 'tis also as plain
That Tyrconnel's [17] chief aim

Was to bring in his daughter Frances.
That church will dispense [18]
With no heretic wench,
But yet we have this for our comfort:
If the priest at the Court

Denies us the sport,
The Chancery allows us a Mountfort. [19]
Thrice fortunate boy
Who can give double joy,
And at every turn be ready,

With pleasures in store,
Both behind and before,
To content both my lord and my lady.

1.   Lucy - Thomas Lucy Captain of a Troop of the Household Guards who inherited Charlecote in 1677.
2.   Goodman - Barbara, Duchess of Cleveland, George's mother and mistress of Charles II.
3.   "her" - refers to the new Duchess of Northumberland, Katherine.
4.   poulterer - Katherine’s father, who was in fact a country gentleman, Robert Wheatley of Bracknell, Berks.
5.   blue string - The ribbon of the Order of the Garter.
6.   the rough blockhead - Duke of Grafton.
7.   the soft one - Duke of Northumberland.
8.   King John- John, Earl of Mulgrave, "fearful Mulgrave" in "Satire," accused of cowardice at Tangier
9.   marriage- Mulgrave married Ursula (Stawell), wealthy widow of Edward, Earl of Conway.
10.   Hinton- Mall Hinton, a famous prostitute
11.   Newburgh- Foppish Charles Livingston, Earl of Newburgh (c. 1662-94).
12.   Northampton - George Compton, 4th Earl of Northampton and his uncle, Henry Compton, Bishop of London, wooed Ursula, the widowed Lady Conway. Mysterious underhand dealings developed between Lord Mulgrave and the lady's step-father, Mr. Henry Seymour. Northampton sent Seymour a challenge by his young cousin, Hatton Compton, but Seymour refused to fight. Hatton Compton and Edward Seymour's second son "grew very warm, and this morning [February 18] fought near Kentish Town; nobody was killed, but both the principals and one of the seconds wounded"
13.   Shrewsbury- Charles Talbot, Earl of Shrewsbury killed in a duel [1668] with the Duke of Buckingham. Shrewsbury's brother, John, was slain by the Duke of Grafton in a duel [1686]
14.   Ford- Ford, Lord Grey of Werke - one of the main instigators of Monmouth's
Rebellion. After the defeat at Sedgemoor, Grey informed on the others plotters and after paying a fine of £40k was re-admitted to court.
15.   an eminent peer- Robert Spencer, Earl of Sunderland and Secretary of State, persuaded King James II to dismiss his Protestant mistress, Katherine Sedley (he made "whoring a case of conscience").
16.   the countess- Katherine Sedley created Countess of Dorchester. A week later, and although pregnant, she was ‘turned out of Court’  She allegedly went to Ireland but returned to London eight months later. King James's priests considered her dangerous to their plans for Catholicizing England.
17.   Tyrconnel- Colonel Richard Talbot created Earl of Tyrconnel. One of the four Catholic lords who tried to persuade King James to dismiss the Countess of Dorchester. The satirist implies Tyrconnel's purpose was provide his stepdaughter as the new royal mistress. Frances, eldest of the three daughters of his second wife, Frances (Jennings).
18.   dispense with- Condone by dispensation, pardon.
19.   Mountfort- William Mountfort, actor and playwright, was in the service of Lord Chancellor Jeffreys as an entertainer and mimic, a supposed bisexual.
Posted by Anita Davison