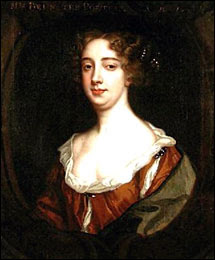 Doing research for my novels, I come across all sorts of fascinating people I cannot resist including in my latest wip.

I have heard of Aphra Behn, of course, as the first women who earned a living from her writing. What I didn’t know about her was she was born Aphra or ‘Eafrey’ Johnson, and spent a year in Surinam, Dutch Guiana in the West Indies, where her father was given a diplomatic post, although he allegedly didn’t survive the journey. Aphra returned to London as a widow, claiming her husband was a Dutchman called Johan Behn, but nothing is known of him, so his existence is still in debate. Perhaps Aphra simply tried to avail herself of the freedom a widow had over a single woman in the 17th Century.

At this time, the Anglo Dutch War was not going well and a group of Cromwellian exiles in Antwerp were working with the Dutch to undermine the Restoration regime.  Aphra was employed by Charles II as a spy, and under the codename, ‘Astrea’, was sent to Antwerp with instructions to reacquaint herself with a former suitor, William Scott, son of the regicide Thomas Scott who was executed in 1660, and discover what the Dutch were up to.

William was eager to ingratiate himself with the English government, but he didn’t know very much so Aphra left Antwerp with very little information. Maybe as a result of this, her expenses were not paid by the infamous William Chiffinch, Charles II’s advisor, administrator of the ‘Secret Service’ budget and reputed pimp to the king.

This led to her borrowing the money to enable her to return to London in January 1667,  but also resulted in her spending some time in gaol for debt as she had no means to repay it.  Perhaps King Charles was told of her fate, or another benefactor stepped forward, but Aphra’s debts were finally discharged and she was released sometime in 1669.

In March, 1677, Aphra’s most successful work, The Rover was produced and Nell Gwyn came out of retirement to play the role of the whore, Angelica Bianca ('white angel'), her performance praised by The Duke of York (later James II) who was also rumoured to have been Aphra’s lover.

Nell Gwynn also took the lead as Lady Knowell in Aphra’s next play, Sir Patient Fancy (1678), and The Feigned Courtesans (1679), which Behn dedicated to Nell.  Maybe due to the demands of the debauched Royal Court, Aphra’s plays were becoming sexually risqué, with Behn herself being accused of being a libertine.  Her friendship with the Earl of Rochester, infamous for his sexual escapades and explicit poetry did nothing to allay this impression.  In fact her hero in, The Rover, was said to have been based on Rochester.

Aphra openly expressed her views on love and sex in her writing, and her poetry portrays romantic relationships with both men and women, discusses rape and impotence, puts forth a woman's right to sexual pleasure, and includes scenes of eroticism between men.

In 17th Century Theatre, women were assumed to be of low morals, their success coupled with envy in a traditionally male profession. Ignoring them all, and enjoying the patronage of the King, Aphra continued writing. The tragicomedy  The Young King was produced in the autumn of 1679, The Revenge in 1680, followed by The Second Part of The Rover in early 1681, The False Count in November and The Roundheads in December, 1681.  The City Heiress was produced in the spring of 1682. Audiences loved her plays with their rampant sexual content, but she had her critics. Alexander Pope, for instance, wrote of Behn:

The stage how loosely does Astræea tread
Who fairly puts all characters to bed.

When The Duke's Company merged with the King's Company to form the United Company, Aphra turned to writing poetry. Poems Upon Several Occasions appeared in 1684, as did Love Letters Between a Nobleman and His Sister.

When Charles II died in 1685 and was succeeded by his brother, the Duke of York, as James II. Behn wrote verses on both occasions, and returned to writing for the stage. The Lucky Chance was performed in 1686  followed by the farce The Emperor of the Moon, which was not successful.

In 1688, Behn published Oroonoko, about a noble slave and his tragic love. Aphra claimed to have based this story on a slave leader she had met during her year in Surinam. It was an instant success, going through many reprints, and was even adapted for the stage by Thomas Southerne in 1695.

By the time James II was forced to abdicate his throne, Aphra was quite ill with rheumatoid arthritis. Her own descriptions of her lame hands and the lampoonists' cruel verses mocking her "limbs distortured" suggest she kept writing despite extreme pain. Aphra died on April 16, 1689, and was buried in Poets’ Corner, Westminster Abbey. Two of her plays, The Widdow Ranter and The Younger Brother, were produced and published postuhumously.

The introduction to her "The History of the Nun" has been taken as a suggestion that Behn had romantic relations with Hortense Mancini, another of Charles II’s mistresses and notoriously bi-sexual. In it she says:

.......how infinitely one of Your own Sex ador'd You, and that, among all the numerous Conquest, Your Grace has made over the Hearts of Men, Your Grace had not subdu'd a more intire Slave; .............. the honour and satisfaction of being ever near Your Grace, to view eternally that lovely Person, and here that surprising Wit; what can be more grateful to a Heart, than so great, and so agreeable, an Entertainment? And how few Objects are there, that can render it so entire a Pleasure, as at once to hear you speak, and to look upon your Beauty?

Aphra was unapologetic on the subject of her explicit writing, saying she was: ‘forced to write for Bread and not ashamed to owne it.’

All women together ought to let flowers fall upon
the tomb of Aphra Behn, ...for it was she who earned
them the right to speak their minds.
Posted by Anita Davison

I've been reading about John Law: gambler, criminal, genius, founder of our monetary system. His story is nothing short of amazing, but it is the story of his wife Catherine that intrigues me most.

Early in his eventful career, after a night of successful gambling, Law was introduced to Madame Catherine Seigneur (née Knowles, or Knollys, 1669 — 1747), an English noblewoman — a descendent of Anne Boleyn, in fact — who was married to a Frenchman.

Although there are no images of her (regretfully), she is described as having "dainty features, a generous bosom and minuscule waist." The Duc de Saint-Simon described her as "rather handsome," but flawed by a birthmark that covered one eye and the upper part of one cheek.

Saint-Simon goes on: "She was proud, overbearing and very impertinent in her talk and manners."

The few bits available give hints of her character: "...she was accustomed to say there was not a more tiresome animal in the world than a Duchess." [Memoirs of the life of John Law of Lauriston]

Attracted to this clever, outspoken women, Law pursued her. She was a married noblewoman, and he a gamester with criminal record and a mysterious if questionable lineage. Such an alliance was unthinkable, but they were in France, far from home. And far from her husband, it would appear; at the least, there is no record of his objection.

Law had a "knack" of winning at dice and games; when the pattern became visible, he was in the habit of moving on. But this time there was Catherine. He asked her to run away to Italy with him.

To run off with Law would ruin Catherine's reputation forever; there would be no turning back. One can only surmise that she was 1) miserable in her marriage, and 2) madly in love with John Law, for she agreed to this ruinous course of action.

She became Lady Catherine Law, although marriage was impossible. News of her betrayal made a news journal in Paris.

It was a peripatetic life: Genoa, Rome, Florence, Turin, Venice. At each city Law supported them with his gambling, successfully playing the tables — but all the while researching banking and finance. Over time — and countless moves, often "on the run," and either in greatly feted glory or in hiding from an outraged mob — Catherine bore him two children, a son and a daughter.

She seemed to have been game for it all. Their's is surely a love story. If only I could discover more.

{Image: an engraving from a print by Leon Schenk showing John Law as Controller General of Finance of France.}

Source: The Moneymaker by Janet Gleeson — a fantastic biography.