STEELEYE SPAN AND THE COUNTESS OF DERBY 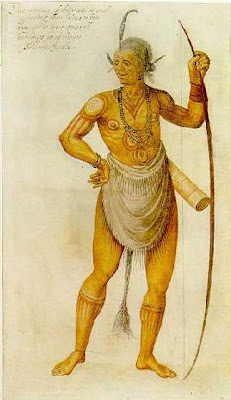 Susan writes often about the 17th century, and most often about details of daily life, which I relish. 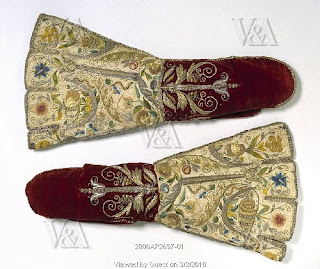 One of her recent posts had to do with gloves: Gloves for Show, Not for Snow. The details are delicious: gloves of white or cream perfumed leather, mittens of silk velvet with elaborately embroidered gauntlet cuffs decorated with spangles, pearls or beads.

A previous post on embroidered jackets — All That Glitters: Two Extraordinary Embroidered Jackets — notes that such richly-adorned, hand-decorated fabrics were common wear for the upper crust. Today, it's almost impossible to imagine the time that went into the creation of these works of art, and even more impossible to replicate: yet this is what a team of volunteers for the Plimoth Plantation in Plimoth, Massachusetts, did, in fact. 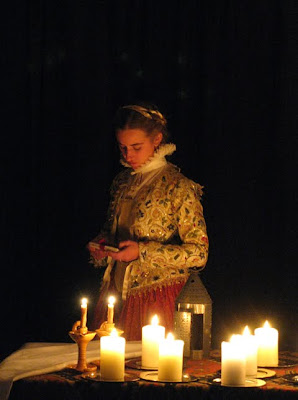 How many hours did it take to produce the embrodered jacket shown above? Four thousand —  two to three people working full-time for one year. Over two hundred and fifty people took part in this project: stitchers, lace makers, spanglers. The jacket was named Faith, because that's what it took to make it.

The project added greatly to the understanding of history, techniques and materials. It certainly has added to my own understanding. This short video of a woman wearing the jacket in candlelight shows what an evening fête must have been like in the 17th-century, the metalic threads catching the light as a woman moved by, like fireflies on a summer night. This video — click here — shows the same enchanting effect.

The Embroiderers' Story is a blog that documented the process. It makes me long to take up my hoop and needle, but for now, I'll content myself with clothing my characters in starlight. 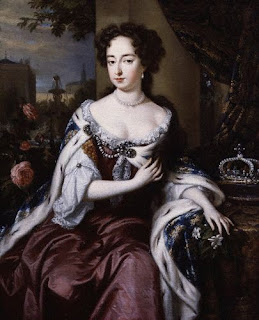 Maureen Waller's book, 'Ungrateful Daughters' depicts the lives of Mary and Anne, the daughters born to James, Duke of York and his first wife, Anne Hyde. These two little girls, brought up as Protestants on orders of their uncle, King Charles II, were considered minor royals. They had brothers who took precedence over them and the king had yet to marry, so no one imagined these girls were anywhere near the throne.

Of Anne Hyde's eight children, only Mary and her younger sister, Anne, survived into adulthood, and Mary was only nine when she died. Her father remarried the Catholic Mary of Modena, who was said to have announced to his children when he brought the fifteen year old princess to meet his daughters, ‘I have brought you a new playmate.’

At 15, Mary was married to William, Prince of Orange, her cousin, Charles II wanted Mary to marry the Dauphin Louis of France, but pressure from Parliament ensured the marriage took place, though Mary wept throughout the ceremony.

Mary grew to love her husband and with her personable nature, the Dutch people loved her, although Mary was unhappy due not only to William’s devotion to his mistress Elizabeth Villiers, but her three pregnancies ended in miscarriage or stillbirth.

Six foot tall, like her Uncle Charles, Mary possessed the dark hair, complexion and heavy lidded eyes of the Stuarts. She also battled with her weight all her life and tried to keep it down by daily walking.

Revolution - Charles II died in February 1685 without an heir, and his illegitimate son, James, Scott, Duke of Monmouth, led a rebellion to take the throne. Mary adored her handsome cousin and was devastated when her father had him executed in July 1685.

James II’s bid to annul the Test Act, his appointment of his Catholic friends into leading government positions in an attempt to grant freedom of religion to non-Anglicans made him universally hated. Then Mary of Modena gave birth to a son, James Francis Edward who was immediately baptized into the Catholic Church. Despite no evidence but gossip, the baby was called, ‘the warming pan baby’, purported to be smuggled into the Royal birth chamber as a substitute for the Queen’s stillborn baby. Princess Anne, Mary’s younger sister, told Mary in a letter that the Queen's pregnancy was a hoax, as Anne had tried to touch her growing bump and been slapped across the face with a glove.

William of Orange was invited to come to England to protect the Protestant Church. At first he was reluctant; but Mary convinced him she had no desire for political power for herself, he agreed. Five hundred of William’s ships landed in Torbay on 5 November, 1688, most of the disaffected English Army and Navy went over to William, and James escaped to France where he lived in exile until his death.

Mary was criticised for appearing cold to her father's plight, and was reported to have searched ther stepmother's apartments and gloated over the possessions she had left behind, refusing to send them on to her in France.

James sent Mary a letter condemning her for declaring herself queen, ‘while her father and brother lived’ She was so distraught, the coronation ceremony had to be postponed for several hours.

In 1692, she dismissed and imprisoned the soldier hero John Churchill, 1st Earl of Marlborough, suspected of negotiating with James II in St German. This harmed her relationship with her sister Anne, who was strongly influenced by Churchill's wife, Sarah.

Mary and William brought Dutch architecture and garden design to England. Mary loved Delft pottery and had cabinets full of ornaments in her private apartments. She also loved jewels, and William often had to warn her about over spending on jewellery. Mary died of smallpox at Kensington Palace at the age of 32.

William was reportedly inconsolable. He ordered work to be completed on a private closet for Mary in Hampton Court that she would never see, and gave all her jewels to her sister, Anne, a woman he had no time for during his wife's life.
Posted by Anita Davison