Queen of the Pamunkey 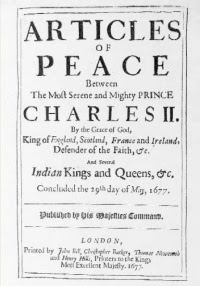 Daughter of paramount chief, Opechancanough, Cockacoeske was known as the Queen of the Pamunkey. Queen is an incorrect term, but it was the closest 17th-century word to the English concept. In reality, Cockacoeske was a weroansqua, or a female chief. The correct title for a male chief was weroance, and they were usually referred to by the English as kings.

Born around 1640, little is known about Cockacoeske's early life. In 1656, she became chief of the Pamunkey upon the death of her husband Totopotomoy. An ally of the English, he was killed in a battle while fighting against other native tribes. Later, Cockacoeske had an illegitimate son with Colonel John West. The boy was also named John West.

Despite the Pamunkey's alliance with the English, they were attacked during Bacon's Rebellion (a topic for a future blog). Men, women, and children were captured or killed. To save her own life, Cockacoeske went into hiding and nearly starved to death. Her son was one of those captured. During the investigation of the rebellion, the royal commissioners determined that Cockacoeske had remained loyal to England, and she was rewarded with regal attire.

Cockacoeske is best known for the Treaty of Middle Plantation in 1677. The treaty made her the leader over a number of Indian nations, including the Chickahominy and Rappahanock, who were previously not part of the Powhatan chiefdom. The treaty set up the first Indian reservation, the Pamunkey, which exists to this day. Members from the tribe, as well as the Mattaponi, gave tributes of the now endangered river otter skins that were highly prized by the English to the governor. The agreement is still honored and tribal members present deer and wild turkeys to the Governor's Mansion in Richmond annually, on the day before Thanksgiving.

Cockacoeske died around 1686. Her attempt to restore the paramount chiefdom failed as there was little cooperation with the other tribes. By maintaining her alliances with England, she made it possible for her people to survive.