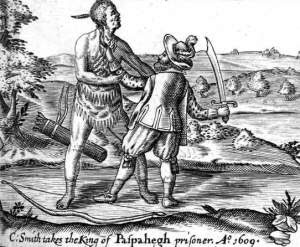 Early in May 1607, the English explored the James River in present-day Virginia and first contacted the Paspahegh (possibly pronounced pa-spa-hay), a Native tribe that was a tributary to the paramount chief Powhatan. They were greeted by the werowance (translates to chief; not understanding chiefs' roles, the colonists referred to them as kings) Wowinchapuncke with a speech.

Continuing on with their exploration, the English sailed up the river into Appamattuck territory before returning downriver a couple of weeks later. On Jamestown Island, they began building a fort. At that moment in history, the Paspahegh became the first Native tribe to fall victim to English expansion in the Chesapeake area of Virginia.

While erecting the fort, the colonists were observed by scouts. The Paspahegh resisted the encroachment, setting the stage for back and forth fighting between the groups. In spring 1610, a new governor arrived in Virginia, Lord De La Warr, upping the stakes even further.

In August on or 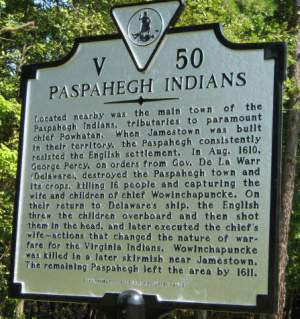 ders from the new governor, George Percy with the reluctant help of an Indian guide led a party of seventy colonists in the predawn hours to the Paspahegh town. The guide attempted to lead the group in the wrong direction and was threatened to have his head cut off. He then altered his course and took the colonists to the town, where a surprise attack was launched, killing sixteen people of their "deadliest enemies" as they left their houses. The colonists continued by burning houses and cutting down the Paspahegh's corn.

A man, the chief's wife and children were captured. The man was beheaded. A "council" agreed to put the children to death. On the short sailing trip back to Jamestown, soldiers threw the children overboard, then shot them in the head. Later, the children's mother was stabbed to death to "save" her from being burned to death by Lord De Le Warr.

Before this time, the Powhatan people did not kill women or children even in warfare as it was against the law of nations. These actions changed tactics among Virginia Indians. Wowinchapuncke was later killed in an encounter near the Jamestown fort, and in 1611, the Paspahegh town was listed as deserted. Thereafter, sadly, the tribe disappeared from the historical record.