I stopped for lunch in Toronto recently after a doctor's appointment. It was a sunny day and I sat outside, facing the Bata Shoe Museum.

There, on an enormous banner, was a blow-up of my character's legs — the shapely legs of King Louis XIV of France.

(He's following me, I thought. He knows I'm not at my desk.)

Only they weren't really his legs.

Men in 17th century France were vain about their legs. Louis had beautiful legs in his youth, as many of his portraits show (it was said that he would always be recognized at a costume ball because of his legs) —
.
. 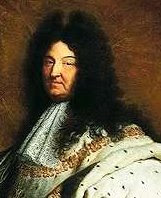 but the face that's on the portrait from which the Bata banner was taken is an old Louis, not matching these legs at all. I learned on a visit to Versailles that a youthful man's legs had been painted in.

.
.
.
.
.
.
I'm often asked what it is I love about French history, and I always think of the painting (below) of Louis greeting the Swiss ambassadors. There the ambassadors are, so somber in black, and there is Louis, a vision in pink ribbons and bows.

.
.
.
I say this only partially in jest. Louis was an exceptionally athletic man: he earned his shapely legs. But in general there was something of the peacock in the 17th century male (including Louis and his cousin, King Charles II of England) that I find delightful. These were supremely macho men, but they were not afraid of pink.
Posted by Sandra Gulland.