In North America, most people think of Salem when witch trials are mentioned, but Virginia has the dubious honor of holding the first such trial on the continent in 1626. Before then, the Powhatan priests were often regarded by the English as witches. In 1613, Reverend Alexander Whitaker stated in Good newes from Virginia, "Their priests (whom they call Quiokosoughs) are no other but such as our English Witches are." Perhaps the colonists preoccupation with the native population and the fact that few English women had yet to arrive held off trials in the beginning.

In any case, Virginia was far less rabid in prosecuting witches than either the home country or Salem. Only thirteen women and two men are known to have been tried for the crime. Granted, many records are likely to have been lost over the centuries, but most of those accused were found not guilty and often turned the tables on the accuser by successfully suing for defamation of character.


Joan Wright was the first person in Virginia to have been tried for being a witch in September 1626. Goody Wright was most likely a cunning woman. Because few in the seventeenth century could afford physicians and those who could often didn't trust them, cunning folk were popular healers for the masses. Joan engaged in foretelling the future and was a midwife. Also, she was left handed, which further helped her accusers to place blame on her being in league with the devil.


Apparently, on at least three occasions, Joan prophesied that certain individuals would bury their spouses, which indeed came to pass. Of course, with modern sensibility, we know that healers of any era often can make such predictions with a high degree of accuracy. In one case, she attended the birth of Lieutenant Giles Allington's wife. Due to Joan's left handedness, Allington's wife distrusted her and a second midwife also assisted.


After the delivery, the woman grew sore in the breast (most likely an infection) and was bedridden for five weeks. Soon after, the lieutenant himself fell sick as did the child. Goody Wright was accused of witchcraft for these incidents and several others. Unfortunately, the record is unclear as to what punishment, if any, she might have received, or even if she was found guilty. However, she was fined one hundred pounds of tobacco for an unspecified act.


Katherine Grady has the unfortunate distinction of being the only person executed in the colony for the offense. In 1654, she was en route from England to Virginia when a violent storm hit. Such disturbances were often associated with witchcraft. Of the passengers, Kath Grady, an elderly woman, apparently best fit the description of a sorceress. Detailed accounts either went unrecorded or were lost, but the captain hung the woman during the storm. Although technically she had yet to arrive on Virginia's shores, the colony can be held accountable for her death as the case fell under its jurisdiction, where the captain reported upon reaching the Jamestown port.


Reverend David Lindsay emigrated from Scotland, a country with many witch trials, and accused William Harding of witchcraft in 1656. He was sentenced with thirteen lashes of the whip and ordered to leave the county. The records do not reveal what it was that he had done to have been found guilty.


Other cases included the usual bewitching of horses, cows, and chickens. Some women were inspected for witch marks on their bodies, but in only one other case were there any serious accusations. 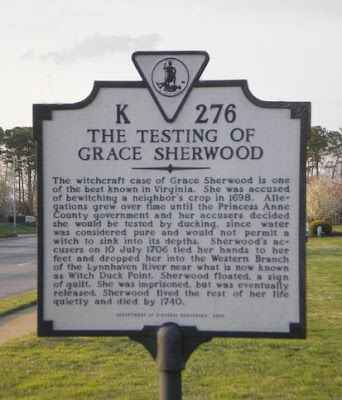 The most famous witch in Virginia's history is Grace Sherwood. She was a healer, a midwife, and most likely a cunning woman. She was body searched, ducked, and finally vindicated on July 10, 2006 when Governor Tim Kaine restored her good name. I'll feature her in a future post as the Witch of Pungo deserves her own space.