Martyrs of the Solway 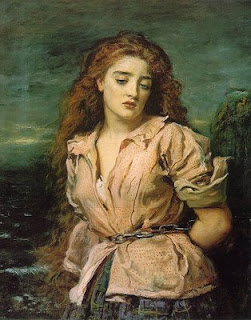 The Martyr of the Solway by Sir John Everett Millais 1871

It is summer 1637 and the cathedral of St. Giles in Edinburgh is packed. Among the congregation are serving women seated on three-legged stools keeping places for their mistresses. Dean John Hanna appears carrying a brown leather bound copy of the English Prayer Book and the murmurs begin. He also wears a white surplice, not the black Geneva gown approved of by the Reformed Church.

Suddenly, a servant girl named Jenny Geddes hurls her folding-stool at the pulpit screeching "Daur ye say mass in my lug" (Dare you say mass in my ear). Her stool is followed by others, until the church is in uproar and the Dean pulls off his surplice for fear of being torn to pieces. David Lindsay, recently appointed Bishop of Edinburgh, tries to quieten the crowd but beneath a tumult of sticks and stones, the Dean and the Bishop take cover in the vestry.

This demonstration seem ludicrous today, but for the citizens of Edinburgh it was in deadly earnest. The Stuart King Charles I, believed the Divine Right of the Monarch made him the spiritual head of the Church of Scotland. The Scots believed this was a position only Jesus Christ could hold.

The Story of the Two Margarets

In 1684, Gilbert Wilson, a Wigtonshire farmer and his wife attended conformist services. However, their children, Margaret 18, Thomas 16, and Agnes 13, became Covenanters and attended illegal ‘conventicles’ to hear prayers and sermons. Mr Wilson was fined for his childrens’ nonconformity, so the children took themselves into the hills of upper Galloway and spent months hiding from the troopers.

On the death of Charles II, in February 1685, the persecution was briefly relaxed when King, James II, himself a Catholic, tried to introduce relaxation of the laws against Dissenters, but the Anglican Church and Parliament fought him all the way.

Margaret and Agnes Wilson left their hiding places and went to Wigton to visit some of their fellow sufferers in the same cause, and particularly the aged Margaret McLauchlan, a Presbyterian widow in her sixties. Their brother Thomas, stayed in the mountains and was lost to history.

Reputedly betrayed, the two Margarets and Agnes were arrested and ordered to demonstrate their loyalty to the King’s authority and swear an oath of abjuration. All three refused and were brought to trial before Sir Robert Grierson, of Lagg, Colonel David Graham (brother to the bloody Claverhouse), Major Windram, Captain Strachan, and Provost Cultrain at Wigton, on the 13th of April 1685.

After the mockery of a trial, they were sentenced to death by drowning. This was to take place in Wigtown Bay, a leg of the Solway, where the wide sands extend two miles out. They were to be tied to stakes fixed in the sand to await the incoming tide.

Gilbert Wilson sold almost everything he owned and borrowed from friends and family, managing to raise a hundred pounds, a vast sum. He rode to Edinburgh to buy his daughters’ pardon, but was forced to choose between the girls. He chose the youngest, Agnes.

On the day of execution, Troopers marched the two women down to the sand, where Margaret MacLachlan was tied to a stake far out in the firth, so that the young girl should witness the death of her aged friend and hopefully recant.

The older Margaret was reputed not to have spoken at all as the sea crept toward her, at which one of her tormentors shouted: "It is needless to speak to that damned old bitch; let her go to hell."

When the water reached the young Margaret’s head, the soldiers loosened her cords and held her above the water so she might, ‘Pray for the King. For he is supreme over all persons of the church’. Margaret said she would pray for the salvation of all men as she wished no one to be condemned. The soldiers pushed her head under the water and tried again, even the crowd begged her to say the oath and save her life. Margaret remained firm and so the soldiers waded ashore and left her to drown in the incoming tide.

The bodies of the two Margarets were buried in the churchyard of Wigton, where a flat stone memorial lies. The stone stake Margaret Wilson was reputed to have been tied to stands as a memorial, although the sea has receded and the flood plain of the Cree is now a vast merse. (salt marsh).
Posted by Anita Davison