In the Aftermath of Battle

First up some good news:  both my books, BY THE SWORD and THE KING'S MAN have been re-released,  initially as ebooks (electronic books) - available in all formats including Kindle and Apple. A print version of the award winning BY THE SWORD will soon be available. For details on how to purchase the books, please visit my website http://www.alisonstuart.com

THE AFTERMATH OF BATTLE 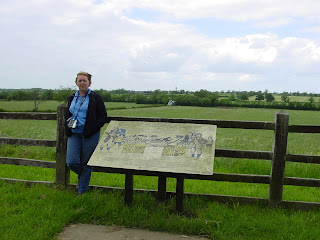 The 14th June marked the 365th anniversary of the decisive battle of the English Civil War, the battle of Naseby. I had intended to blog about the battle but in doing the research for the blog, I became fascinated not so much in the battle itself (about which much has been written- including several books), but about the aftermath of the battle, the prisoners and the wounded.
On the day of the battle, it is estimated that 12,000 Royalist troops took the field to face 15,000 Parliamentarians, a newly formed, well trained and armed “standing army” - the NEW MODEL ARMY of Sir Thomas Fairfax and Oliver Cromwell. Behind both armies were the baggage lines where the camp followers, the women who followed the drums, prepared themselves for the inevitable stream of wounded to care for. In the royalist lines were the female camp followers, English, Welsh and Irish, soon to become innocent victims in a man’s war.
The battle commenced about 10 in the morning and was all done by 3.30pm with the King and his men in full retreat. The King’s baggage train was overrun and according to legend, the women of the train took flight along the Clipston Road. It was there one of the less glorious moments for “God’s chosen” victors took place. The hatred the English bore for the Irish mercenaries, fuelled by stories of the massacres of good protestants by evil catholics, was borne out on the women of the baggage train.
Mistaking the Welsh speaking women for Irish, the forces of Parliament carried out a massacre. It is not known how many were killed but there are contemporary accounts of up to 300-400. One contemporary witness reports “The Irish women Prince Rupert brought on the field (wives of the bloody Rebels in Ireland, his Majesties dearly loved subjects) our soldiers would grant no quarter too, about 100 slain of them, and most of the restof the whores that attended that wicked Army, are marked in the face or nose, with a slash or cut.” (Rushworth letter). The common punishment for a whore was to split or cut off the nose of the offender, marking them for life. Those women of more means who were able to gather up wagons and coaches, managed to make some sort of escape without meeting the fate of their poorer sisters.
Meanwhile the King’s men did not escape lightly, those that were not slaughtered in their retreat, were captured. From a force of 12000 men who had taken the field that morning, less than 4000 reached safety and many of those were badly injured. Parliament’s New Model Army had destroyed the King’s army and the last hope of victory. Casualties on the Parliament side numbered barely 150 while over 1000 of the King’s men lay dead.
The royalist baggage lines proved rich pickings for plunder. The King’s own baggage was taken, including a “cabinet” containing his personal correspondence. This discovery was a God given propoganda opportunity and were published as “The King’s Cabinet Opened” within weeks of the battle.  The letters were a damning indictment on Charles, revealing his attempts to negotiate treaties with the hated Irish and other foreign powers to bring their forces over to England. 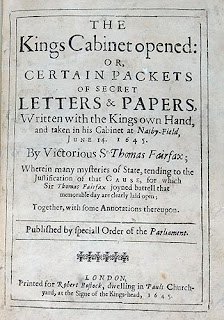 For any victorious army, prisoners are a problem and accounts suggest that the royalist prisoners numbered between 4000-5000. These were all men who needed to be fed, sheltered and their wounds treated. Local churches, being large and easily secured, were used as temporary lock ups. The majority of them were marched south to London where they were paraded, along with the captured colours, through the streets of London. A gibbet was prominently on display in case any took it into their heads to take flight or cause trouble. After wringing the most of the propoganda value from the display as they could, it was decided that the majority of the prisoners should simply be released to go home on giving their promise not to fight again. The majority who chose not to give that undertaking were sent to serve “in Foreign parts” (Ireland, Spain or France) or were simply imprisoned for a couple of years. The royalist officers (numbering just under 500 - mostly infantry) were held separately from the common soldiers.
Not included in the figures for the prisoners were the seriously wounded, numbering about 500. They were distributed around the nearby villages. There are ample contemporary accounts of the local villagers claiming compensation for their troubles in caring for the wounded of both sides after Naseby. Payment for treating the winning side tended to be more generous. For the romantically inclined there are stories such as those of “Mr. Mansell” who was found alive by a young woman who nursed him back to health.
Finally in the aftermath of a great battle comes the thankless task of clearing the battlefield, a task which extended well beyond the confines of the Naseby field as the flight of the royalists was marked by the dead and dying. Tradition tells us the task fell to the local villagers who stripped the bodies and buried them in mass graves, some so shallow that within a short time, they “became very offensive, that matter issued from the graves and ran several yards upon the ground, which, having subsided the cattle ate those spots, for several years remarkably bare.”(Mastin 1792).
I have visited the battlefield at Naseby twice (see photo). It is now cut in two by a major arterial road (it is hard to imagine the Americans allowing such a sacrilege to happen to their battlefields!). Apart from an obelisk erected in the nineteenth century, there is little to mark such a decisive battle and even harder to imagine the carnage of that awful day.


To read more on the Battle of Naseby see: