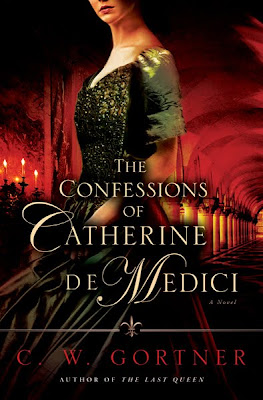 This week I'd like to present a guest post by C W Gortner, author of The Confessions of Catherine de Medici. Although Catherine de Medici lived in the 16th rather than the 17th century, I felt she was nonetheless appropriate for this blog since she is most certainly a Hoyden, if not an outright Firebrand. Many of you already know Gortner from his previous novel, The Last Queen, which presents a sensitive portrait of the tragically misunderstood Juana "La Loca" of Castile. Gortner has passionately rewritten the histories of these maligned women, giving them voice and allowing them to tell their stories and set the record straight. And you never know . . . he might eventually write about a 17th century Firebrand.
-Mary Sharratt

Catherine de Medici is known as the evil queen who masterminded a massacre. Or so the legend says. In truth, Catherine has been the target of a smear campaign that began in her lifetime and culminated with Alexander Dumas’s famous depiction of her in his novel La Reine Margot. Dumas exalted the queen we love to hate and enshrined her as history’s black widow.

Of Italian birth, Catherine came to France as a teenager to wed Henri II. To this day, she is not considered French; her background as a Medici made her a parvenu and prejudice against her because of her nationality haunted her throughout her life. Italians were despised as experts in the black arts; Catherine’s natural inclination toward her fellow countrymen was thus often used against her.

One of the greatest misconceptions is that Catherine nurtured a “passion for power”—another Italian trait. Though not raised to rule, she became regent for her sons in a kingdom torn apart by war. Her alleged ambition was in fact an effort to defend her adopted realm. While she made serious errors, she was usually motivated by the urgency to salvage a crisis than any cold-blooded urge to her foes.

In the end, she is best revealed by her own words: “It is great suffering to be always fearful.”

Thank you so much for spending this time with me. To find out more about The Confessions of Catherine de Medici, please visit: www.cwgortner.com
Posted by Mary Sharratt

Mr Gortner is a great author for revealing the truth of commonly held beliefs about historical characters. I will definitely add this one to my To Read list

I'm excited to read this one ;)

Nice to see you on Hoydens & Firebrands, Chris. BRAVO on the Confessions!