He was described as "the handsomest-bodied man in all of England"* James I called him his "sweet child and wife". He was James’ “Sweet Steenie” (a nickname that referenced St. Stephen, who was said to have had the face of an angel).

George Villiers (1592-1628), was born a commoner - a gentleman for sure, but still a commoner. His ambitious father, a Leicestershire knight, introduced the precocious and by all accounts, devilishly handsome young man to the court in 1614 where he quickly caught the eye of the King. James I was not a prepossessing object of desire. By all accounts he had rotten teeth and rarely bathed and despite his marriage to Ann of Denmark, his interests, it is said, may have lain in other areas. Throughout his reign a succession of handsome young favourites dallied with the King’s affections and George may have been the latest in the long string, had it not been for his own overwhelming ambition.

He returned the aging King’s affections writing such tender words as: "I naturally so love your person, and adore all your other parts, which are more than ever one man had," "I desire only to live in the world for your sake" and "I will live and die a lover of you." He rose rapidly in the court becoming the Duke of Buckingham in 1623, making him the highest ranking noble in England outside of the royal family. James’ patronage gave him enormous power which he wielded in favour of his own family and in the acquisition of land and power in Ireland. The sheer extent of his power and influence did not win him many friends.

In 1620 he married the seventeen year old Katherine Manners with whom he had two children George (later to become the second Duke of Buckhingham and friend and confidante of Charles II) and Francis (who died young).

In the final years of James’ reign, Buckingham won over Prince Charles with whom he formed a close friendship. Early in his reign, James had concluded a peace with Spain and he hoped to cement relations with an alliance between his son Charles and the Spanish Infanta. Negotiations were delicate and protracted. This led him into direct opposition with Parliament who opposed any alliance with the Catholic Habsburgs. James declared that Parliament had no right to dictate to him on matters of foreign policy and dissolved Parliament. As the negotiations meandered on, Buckingham persuaded the young Prince to take matters into their own hands and they both left England on a hare brained expedition to Spain to woo the Infanta in person. The venture was a disaster. Buckingham’s behaviour in Madrid so outraged the Spaniards that the Spanish Ambassador in London demanded Buckingham’s execution. Buckingham in his turn called for war, a surprisingly popular move with an English population who still remembered the Spanish Armada. With the fall from power of the “Winter King and Queen” (Frederick of Bohemia and his wife Elizabeth, sister of Charles I) see Hoydens and Firebrands:  Thirty Years War Beginners Guide, public sympathy inclined towards war with Spain.

Charles married the French princess Henrietta Maria in 1624, a pointed snub at the Spanish. He ascended to the throne on the death of his father the following year. Buckingham was the only man in James’ court to retain his position of power and influence with the new King. He continued to agitate for war with Spain and with Charles’ connivance led an abortive, if not farcical attack on Cadiz followed by a further failed attempt to intercept the Spanish silver fleet. His influence on the young King and his unpopularity began to grow.

Meanwhile in France, Henry Iv’s Edict of Nantes in France had granted a modicum of tolerance to the French Protestants (The Huguenots). The ascension to power of a young Louis XIII in 1610 under the regency of his mother, the formidable Marie d’Medici, anti protestant sentiment began to rise, ultimately exploding into the Huguenot uprising of 1621. A blockade of La Rochelle, a Huguenot stronghold, by the forces of Louis XIII ended in the treaty of Montpellier. A second uprising in 1625 led Louis to declare the suppression of the Huguenots as the first priority of the nation.

Through the “diplomacy” of Buckingham, English ships were used by the French against the town of La Rochelle in return for French support against the Spanish occupation of the Palatinate. The English Parliament and public sentiment were appalled at the very idea of English protestants being used by French Catholics against fellow Protestants. Buckingham accused Cardinal Richelieu of treachery and in 1627 Charles sent a fleet of eighty ships, under the command of Buckingham to La Rochelle with orders to foment rebellion. Initially the Huguenots resisted the English intervention, only announcing an alliance in September when the first hostilities with the royal troops commenced. The English blockade St. Martin but the blockade was ineffective and they were forced to withdraw with a loss of 4000 out of a force of 7000. At La Rochelle, French engineers isolated the city with entrenchments 12 kilometres long, fortified by 11 forts and 18 redoubts. The surrounding fortifications were totally completed in April 1628, manned with an army of 30,000. English attempts to resupply the city were repulsed.

Back in England, Buckingham’s popularity had hit its nadir. He had only been saved from impeachment by Parliament because Charles had dissolved Parliament. His personal physician, Dr. Lamb was mobbed and killed on the streets.

John Felton, an English Lieutenant who had been wounded at La Rochelle in 1627, held a particular grudge against the Duke. He believed he the Duke owed money and advancement for his loyalty during the Anglo-French war. On 23 August 1628 Buckingham went to the Greyhound Pub in Portsmouth where he planned to start work on a new campaign in France. There Felton stabbed him. Buckingham reportedly gave a cry of “Villain!” and made to pursue his assassin before falling down dead. Felton foolishly believed he would be hailed as a hero and on publicly declaring his guilt was somewhat surprised to find himself arrested. He was hanged at Tyburn on 29 November 1628 and his body sent back to Portsmouth, no doubt to be used as an example. Instead it became an object of veneration and many pamphlets and poems were written applauding his actions. 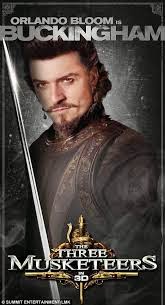 Where fact meets fiction: The Duke of Buckingham is perhaps best recalled as a fictional character in Dumas’ THE THREE MUSKETEERS, in which he is portrayed as the secret lover of Queen Anne of Austria. The Queen bestows a gift of diamonds on her lover who takes them back to London and it becomes the musketeers objective to retrieve the diamonds before their loss is discovered by a jealous Louis XIII. This they succeed in doing but are unable to prevent the assassination of the Duke through the agency of Cardinal Richelieu and his fictional agent Lady deWinter. 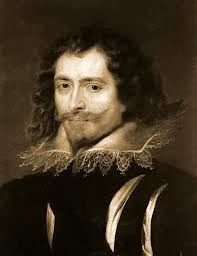 How does history judge George Villiers, Duke of Buckingham? An inept manipulator who used his charm and good looks to pray on two powerful but weak men? What do you think?