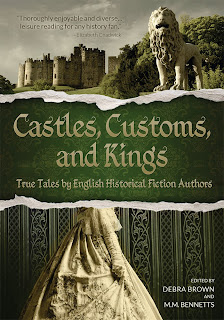 The Hoydens are delighted to welcome Debra Brown to be our guest this week. Debra is the webmistress and doyenne of a fellow blog, the English Historical Fiction Authors Blog as well as being an author in her own right.

The contributors to this blog have come together to produce a gorgeous book with a luscious cover:  CASTLES, CUSTOMS AND KINGS (buy links are at the end of this post) - the perfect Christmas present for a lover of history. Contributors include our own Hoyden, Deborah Swift.

I am in a position I dearly love as the owner of the English Historical Fiction Authors blog. Though I have a restless mind, running the blog makes me focus on a daily dose of British history written by numerous learned authors.

At this writing, we have nine hundred fifty two posts in the line-up. This means I have read around nine hundred fifty luscious, English/British history posts. Can you imagine? Finally those dates I memorized in school have events connected to them, and I even know something about the events.

It is exciting to have released an historical anthology this fall—a select group of posts from the first year of the EHFA blog titled Castles, Customs, and Kings: True Tales byEnglish Historical Fiction Authors. It contains a wide variety of topics which are organized in the chronological gamut from the Roman era to World War II written by fifty-five authors.
Here on Hoydens and Firebrands, the focus is on the 17th century—so allow me to share some interesting Stuart era points from the book.

Margaret Skea wrote about The Three Weddings of James VI and I (But Only One Wife). Most of us only get married once, she said, and that to the same person.

James chose Anne, Queen of Denmark, saying she pleased his subjects and God—who had “moved his heart in the way that was meetest”. Margaret confesses she is not sure whether James’ understanding of God’s will was influenced by the fact that Anne was eight years younger than himself while the other candidate, Catherine of Navarre, was eight years older and looking her age. Anne first married James by proxy with George Keith, Earl Marishchal standing in.

Anne left Denmark to meet her man with a small fleet, but storms battered the ships, endangering her life. The Admiral concluded this was the work of witches and sought safe haven in Norway. Witch trials followed in both countries.

James, to bypass concerns for his safety, sneaked off to Norway on ships paid for by the Lord Chancellor of Scotland. Their second wedding took place in Oslo, and finally in January 1590 for the benefit of the Danish royal family, they married a third time at the castle of Kronborg in Denmark.

James I was obsessed with daemonology and witches, according to Deborah Swift. In her essay called A Witch’s Lair Found Buried Under a Mound, she tells about a house that was uncovered just before the 400th anniversary of the Pendle Witch trials in 2012. In the walls of the house in what was called the wild and lawless region of Lancaster, an area “fabled for its theft, violence and sexual laxity, where the church was honoured without much understanding of its doctrines by the common people”, was found a mummified cat.
Concealing things in old buildings was common in the 17th century, Deborah says. Some 1,700 shoes concealed shoes have been found, not just in Britain, but also in Germany, Australia, Canada, and the United States. Perhaps the shoe was thought to trap the spirit of the wearer.

Sam Thomas wrote So You Say You Want an Execution. As you might expect at such a well-attended correction of everything gone wrong from theft to murder, prayers were said, sermons preached, and speeches delivered.

However, Sam tells us, some executions had all the dignity of a three-ring circus. Peddlers strolled through the crowd crying their wares, and the crowd ate, drank, and socialized.
One pamphlet from 1696 shows a preacher delivering an execution sermon on one platform while behind him one can see not only the condemned offering up his last prayers, but a magician performing on an adjacent stage. Sam claims to prefer, in this case, to be the opening act rather than the headliner.

Read Sam’s article in Castles,Customs, and Kings to learn why one judge attacked a soon-to-be-killed prisoner.

As most of us know, before the Restoration female roles in plays were performed by men. Charles II, however, had been to the theater in France during his exile where he saw women performing, and, Karen Wasylowski informs us in her post The First Actresses: Nell Gwyn to Sarah Siddons, he noted that it had caused neither outcry nor panic in the streets. A new career path for unprotected British women opened up: Actress.

The first “bombshell” actress was the King’s mistress, Nell Gwyn. She was sexy and funny, and she made use of the wardrobe malfunction in her portraits to enhance her notoriety. Unfortunately for serious actresses, by the mid-eighteenth century brothels had developed amidst other businesses around the theater district, increasing the connection between theater and sex, acting and prostitution.

In the second half of the 18th century, to bring greater legitimacy many full length portraits were made by famous artists, providing dignity and a positive image of their roles. Karen says, “A refined, gentle sort of eighteenth century Paparazzi mentality had begun.”

You will want to read Linda Collison’s essay Lloyd’s: Lifeblood of British Commerce and Starbucks of its Day to see how a coffeehouse developed into an insurance market, philanthropic efforts, and the creation of a fund for wounded soldiers and the dependents of those killed in battle.

Not all has gone well for Lloyds. They insured the “unsinkable” Titanic. The 1906 San Francisco earthquake, the attack on New York’s World Trade Center, Hurricane Katrina, and Japan’s 2011 earthquake and tsunami cost them. Linda says, “The history of Lloyd’s is a fascinating one, and still evolving. Wherever there is risk and money to be made you’ll find the name Lloyd’s.”

I have barely touched on a few of the nearly two hundred posts in this large, beautiful book. Readers have said, "It was literary comfort food – a recollection of childhood, warm and satisfying." "I found the approach charming and reassuring." "Despite the length, there is no encyclopedia feel and each author's voice is well preserved." "This book is a scholarly treasure trove with a wide appeal."

You can settle down for an evening with this book or pick it up during a coffee break. The topics are but a few pages each, and you can go from place to place in the book as your mood dictates. Castles, Customs, and Kings, edited by myself and M.M. Bennetts, is a wonderful gift for any lover of history.

Debra Brown is the author of the early Victorian novel The Companion of Lady Holmeshire.
Website. M.M. Bennetts, an early 19th century specialist, is the author of May 1812 and Of Honest Fame Blog

Alison, thank you so much for having us here on your wonderful blog. I appreciate the addition of a few pictures as I forgot to send any! Perfect pictures.

Lovely to have you with the Hoydens Debbie, and what a fascinating post - though paraphrasing from Mandy Rice, I would say that wouldn't I?

Thank you Alison and Debbie for mentioning my CC+K post here. And now I have another interesting blog to browse...

What a pretty blog - and as ever, Debra never fails to be interesting.
Grace x