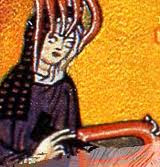 When I was forty-two years and seven months old, Heaven was opened and a fiery light of exceeding brilliance came and permeated my whole brain, and inflamed my whole heart and my whole breast, not like a burning but like a warming flame, as the sun warms anything its rays touch.


Neurologist Oliver Sacks believes that the dazzling visions of Hildegard von Bingen (1098-1179), the great Benedictine abbess and polymath, were caused by migraines. Hildegard struggled with chronic health problems. In Scivias, her first book of visionary theology, she describes being bedridden when she received the divine command to write and speak about her visions that she had kept secret since earliest childhood. Sacks maintains that the symptoms she describes are identical to those of migraine sufferers. He also states that the concentric rings of circles in the illuminations of her visions are reminiscent of a migraine aura.

Critics of this theory will point out that Hildegard, in her medical treatise Causae et Curae, described the migraine in detail but never connected this diagnosis to herself. Moreover she herself did not paint the illuminations that illustrated her visions. So the rings of light could be the illuminator’s stylistic interpretation and unrelated to any alleged visual hallucinations on Hildegard’s part. The migraine sufferers I know in my own life regrettably report that they’ve never beheld wondrous visions.

Thus, the migraine theory remains speculative. In our hyper-rationalistic age, I think we are too hasty to “diagnose” historical figures with readily identifiable conditions—i.e., “Mozart was autistic.” One thing we do know is that Hildegard lived in an age of faith. She and those around her sincerely believed her visions were real. Hildegard’s epic trilogy of visionary theology relates her revelations of the human struggle for redemption and imparts how the fallen world can be reconciled with the created world. Therein lies her genius, not in any catalogue of physical symptoms.

In Scivias, Hildegard describes her visions in her own words:

The visions I saw I did not perceive in dreams, or sleep, or delirium, or by the eyes of the body, or by the ears of the outer self, or in hidden places; but I received them while awake and seeing with a pure mind and the eyes and the ears of the inner self, in open places, as God willed it. How this might be is hard for mortal flesh to understand.


Long celebrated as a saint in her native Germany, Hildegard was finally canonized in May 2012. In October 2012 she was elevated to Doctor of the Church, a rare and solemn title reserved for theologians who have significantly impacted Church doctrine.