I must confess to pure self interest in writing this blog because for me the Thirty Years War  is something that happened in “the backstory” to my main interest in the English Civil Wars. Yet many of the men who fought in the English Civil Wars, Prince Rupert and Thomas Fairfax for example, served on the continent and gained their experience in the bloody conflict that raged across Europe and involved nearly all the main European powers . 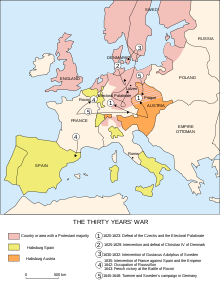 So how did it all begin?

As many wars of that time did...with religion! I won’t go into the complex toing and froing of the sixteenth century that began with the Peace of Augsburg in 1555, brought about by Charles V, the Holy Roman Emperor and intended to end the war between the German Lutherans and Catholics.

Instead we will begin in 1618 with "The Bohemian Revolt".

In the absence of an heir in order to ensure an orderly succession, Matthias, the Holy Roman Emperor and King of Bohemia (of the Habsburg line), appointed his heir apparent, the Catholic Ferdinand of the Habsburg line (later to become Ferdinand II, Holy Roman Emperor) to the thrones of Bohemia and Hungary. This upset the Bohemian protestants whose preferred candidate was the protestant Elector of the Palatine (and father to Prince Rupert of the Rhine), Frederick V.

In May 1618 Ferdinand’s (Catholic) representatives in Prague were seized by the Protestant Hussites and thrown out of a window in the palace (the "Defenestration of Prague" - footnote to history despite the drop of 50 feet they survived unharmed). This small local revolt quickly spread throughout all of the Bohemian crown (Bohemia, Silesia, Lusatia, and Moravia. The latter already in a protestant/catholic revolt).

The death of Empereror Matthias in 1619 fanned the flames of what should have been a short lived revolt that had been on the verge of settlement. The revolt spread to Western Germany and Ferdinand applied to his nephew, Phillip IV King of Spain for assistance. The Bohemians brought the protestant FrederickV Elector of Palatine in on their side. They were joined by Upper and then Lower Austria and further assistance was rendered in the east by  the Protestant Hungarian Prince of Transylvania, Bethlen Gabor, who led a spirited campaign into Hungary with the support of the Ottoman Sultan, Osman II. The Ottomans offered a force of 60,000 cavalry to Frederick and plans were made for an invasion of Poland with 400,000 troops in exchange for the payment of an annual tribute to the Sultan. These negotiations triggered the Polish–Ottoman War of 1620-21.

On 17 August 1619, Ferdinand was officially deposed as King of Bohemia and was replaced by the Palatine Elector Frederick V.


End of Round 1 New Year 1620:  Ferdinand V has been driven from the throne of Bohemia. Frederick, Elector of Palatine has been crowned King of Bohemia and over in the east war is raging between Poland and the Ottoman empire.

You may recall Ferdinand had applied to Spain for help and in 1620 Spain dispatched an army from Brussels (Belgium at the time was a Spanish possession). Simultaneously, Saxony was persuaded over to the Catholic side and invaded Lusatia. The two armies united and defeated Frederick V at the Battle of the White Mountain (near Prague) on 8 November 1620.

Frederick was deposed as King of Bohemia and Bohemia fell into the hands of the Catholics (where it remains). Frederick and his family become exiles. (For those who haven't made the connection - Frederick’s wife is Elizabeth, “the Winter Queen”, sister of Charles I).

The Spanish, also in conflict with the Dutch, saw the strategic importance of the Rhine Palatinate and sought to occupy it. The years from 1621-1625 were marked by continuing conflict over the Palatinate and by 1625 the Spanish had fully occupied the area, leaving the Netherlands vulnerable. The remnants of the Protestant army withdrew to service with the Dutch.

Meanwhile in France, the succession of Louis XIII to the throne following the death of the Hugueonot sympathiser Henri IV, marked a new period of religious intolerance against the Protestant Hugeonots leading to a general revolt that waged across France during the period 1620-1628. The English became embroiled in the Siege of La Rochelle which led to the Anglo-French war of 1627-1629. Charles I’s attempts to broker peace came to nothing and the English withdrew to deal with their own growing internal difficulties. The defeat of the Hugueonots marked another blow to the Protestant hopes on the continent.

End of Round 2:  1625 - Frederick V, Elector of Palatine and one time King of Bohemia is in exile, the Catholic Habsburgs are in full control of Bohemia, Holland and the Palatinate. The French Catholics, who are unaligned to the Habsburgs are in control of France. The Protestant cause is now resting in Holland, Denmark and Sweden (and over in the East where Transylvania has triumphed).


Stay tuned for Part 2 of the Beginners Guide to the Thirty Year’s War in my next blog.