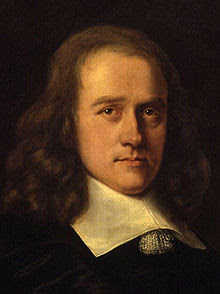 One of the aspects of being a writer of historical novels that I particularly love is the ability to weave my fictional characters' lives into the real events and characters of the day. My novel THE KING’S MAN, in particular, has its feet firmly in the turbulent events of 1654 when a number of generally inept plots to restore Charles II to the throne were foiled.  Behind the unravelling of these plots is one man, the singular spy master of the age, JOHN THURLOE.
John Thurloe so intrigued me that he actually appears in both my books and a large folio print of the man hangs in my stairwell. Thurloe came from a fine tradition of spy masters to the English Court, such as Sir Francis Walsingham and Robert Cecil who dominated Elizabeth’s reign and saved his Queen from assasination on many occasions.
Thurloe, born in 1616, began his professional life as a lawyer, working for Oliver St. John, the English Statesman and judge whose alliance with parliament and personal connections to Oliver Cromwell would have brought Thurloe into the parliamentary circle of influence during the early part of the Civil War.  Under St. John’s patronage he served as secretary to the Commissioners of the Treaty of Uxbridge (an unsuccessful attempt to bring a peaceful resolution to the first civil war) . He also recorded the negotiations with the Dutch in the later years of the 1640s.
He had impressed the right people and in 1652, the Secretary of State died and Thurloe was appointed to the position. The Commonwealth regime under Cromwell was poised in a precarious position with threats to its stability over continuing dissensions in religion matters and with the underground activities of the royalists both at home and in exile abroad and in 1653 the portfolio of “Clerk to the Committe for Foreign Affairs” was added to his duties, along with sole management of foreign intelligence.  Later, he also gained control of the post office, enabling easy interception of the mail to boost his intelligence gathering. Thurloe had become Cromwell’s spy master.
Thurloe set about building an intricate network of agents. They were not hard to find. There were plenty of disenchanted and penniless royalists happy to exchange their former loyalties for regular pay. Names like Joseph Bampfield, Richard Willys, Henshaw and Wildman are all characters who cross my fictional agent's path in THE KING’S MAN.  Through this web of deceit, Thurloe managed to foil the Ship Inn plot (or Gerard’s plot) which is the central plot to my story and to infiltrate the famous Sealed Knot.
He recruited the mathematicians John Wallis and Samuel Morland to his service as cryptographers. Ironically Morland was later to become a double agent and was instrumental in the restoration of Charles II.  In 1657 Thurloe became a member of Cromwell’s second Council of State and began to accept public posts, such as Chancellor of the University of Glasgow.  Following Cromwell’s death he transferred his loyalty to Richard Cromwell, but the younger Cromwell was not the man his father had been and in 1660 Charles II returned to the throne.
Following the Restoration, inevitably Thurloe was arrested for High Treason but he was never tried.  His extensive knowledge of foreign affairs made him too valuable to the new regime and he was released on the promise that he could be called upon to assist England in its troubles with foreign powers but his days of influence were over.  He had been plagued by ill health for many years and died in February 1668 in his chambers at Lincoln’s Inn.
During the reign of William III, workmen discovered the entire collection of Thurloe’s State Papers in a false ceiling during renovations to his former home. These are now readily available online.
Like his predecessors, Thurloe’s strength lay in his ability to work behind the scenes and he had the absolute trust and confidence of the Lord Protector to whom he remained completely loyal, even advocating that Cromwell accept the crown.  Above all the temptations of high office, he seems to have remained absolutely honest and true to himself.  Even one of his political opponents writing in 1659 said: “...(Secretary Thurloe)...having taken no man’s money, invaded no man’s privilege, nor abused his own authority, which is and merits to be great, the weight of all foreign and almost all domestic affairs lying on him...And though intelligences have been infinitely chargeable, yet without it, into whose hands had this nation fallen?...”
I will leave the last word for Richard Cromwell who is famously said to have described Mr. Secretary Thurloe as possessing “...the key to wicked men's hearts...”
Reference:
Philip Aubrey:  Mr. Secretary Thurloe
Posted by Alison Stuart

I find Thurloe interesting too, Alison and this has prompted me to read more about his work during the Interregnum - thank you

It is a rich vein of material for a writer, Anita! Apart from his concerns with the domestic politics, his involvement with the Dutch wars is fascinating.
I suppose I relate to him, because his work is very similar to mine - lawyer turned "company secretary" (only on a MUCH grander scale!).
Alison

Thurloe (who appears in my books too) apparently said that if he were hanged, there were many who passed for cavaliers who would be hanged if his records were made public. They released him from the Tower after 6 weeks. How cool is that?