THE GREAT ESCAPE (Part 1): The Battle of Worcester 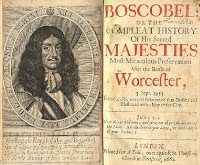 One of the world’s most thrilling “great escape” stories has to be the escape of Charles II after the defeat at the Battle of Worcester on September 3 1651. Just about every old house or inn on his route lays claim to having sheltered him and it has been the subject of many works of fiction (including the basis for my own BY THE SWORD).

The young Prince Charles had fled to the continent at the end of the first civil war (1645). There he kicked his heels at the court of his cousin, the young Louis XIV, very much the poor relation. His chance to return to England and regain his throne came in 1650 when the Scots, disenchanted by their former allies, invited him to Scotland. He was crowned King of Scotland as the Scots raised an army to defeat the English Parliamentarian forces. The Scots kept such tight control over their young King that his life was a misery and many of Charles’ most talented commanders were denied a role in this new army. After the Scots were roundly defeated at the Battle of Dunbar on September 3 1650, it is said Charles threw his hat in the air and laughed.

Undeterred by their defeat, the Scots Army marched into England. As they made their way down the west coast, Cromwell (the new commander of the Parliamentary forces since the resignation of Sir Thomas Fairfax) and his army raced down the East coast. They met at Worcester. The forces Charles had expected to flock to his banner did not eventuate. The King’s supporters in England had wearied of war and weighed down by debt and fines lacked the heart for another fight. The Earl of Derby bringing supporters from the Isle of Man was intercepted at Wigan and escaped with only a handful of men.

Charles dithered in Worcester as Cromwell closed in on him. At the age of twenty one he relied heavily on his advisors and their advice contradicted each other. The poor young King was harangued from every side…should they abandon Worcester and retreat into sympathetic Wales or stay and make a fight of it? The debates in The Commandery (a building that still exists in Worcester and is well worth a visit) raged on until it became too late to do anything but stand and face whatever Cromwell would throw at them.

Cromwell chose September 3 (the day of his victory in Scotland the year before) to launch his attack. The King’s forces failed to capitalise on Cromwell’s one moment of vulnerability

when he sent half his forces across the River Severn to attack Worcester from the South while the main force attacked from the East. Watching the progress of the battle through a spy glass from the tower of Worcester Cathedral, dressed in his buff leather coat with a red sash and his Order of St. George around his neck, the young King ordered his forces out of the city to take on Cromwell in the field.

It was a bold move and leading his men, on foot, up the hill out of the Sidbury Gate, no one would question the King’s courage. He believed that General Leslie would appear with cavalry in support of his charge. Leslie failed him and after three hours of pitched battle, with Fort Royal lost, the King’s men began a mad retreat back inside the city. Sidbury Gate was blocked with an overturned cart, its animals dead in the traces. Undeterred the desparate royalists clawed their way back into the city as night fell with the parliamentary forces hot on their heels.

By chance Charles’ lodgings were in a house near St. Martin’s gate, the only gate still open to them (the house still exists - see Picture. Led by Lord Wilmot, a small, loyal band of his men, harried the shocked and desparate young King

out of the city and north to an even more uncertain fate.

The fate of those who were captured after the battle makes a sad postscript. The Earl of Derby was beheaded, the Duke of Hamilton died of his wounds and the many rank and file of the Scottish Army were largely sent as "white slaves" to the Barbardos, Guyana or Virginia (ah yesl...the subject of another of my books THE KING'S MAN - can you tell this is one of my favourite subjects?).

Next month…THE GREAT ESCAPE Part 2: “Read on and Wonder…” (Thomas Blount in his introduction to Boscobel written in 1660)