My forthcoming novel, A Light Far-Shining: A Novel of the Pendle Witches, arose directly out of the rugged Pennine landscape where I have lived for the past eight years. Writing and researching this novel has been such a joy for me, because I could visit all the locations where the story played out: the characters lived their lives almost literally in my backyard.

In April 2008 I achieved my life-long dream of buying a horse: a beautiful chestnut Welsh Section D mare named Booshka. She is stable near Read, Lancashire, an idyllic setting with stunning views of Pendle Hill. 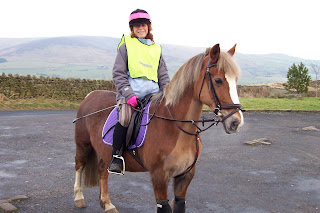 One day last autumn, I decided to combine my twin passions of riding and historical research by hacking Miss Boo to Read Hall, former home of Roger Nowell, the Magistrate and High Sheriff responsible for arresting and prosecuting the Pendle Witches in 1612. The present Read Hall is a 19th century structure, but it occupies the same ground as the Read Hall that existed in Roger Nowell’s day.

Before the 17th century, witch persecutions in England had been relatively rare compared with Scotland and Continental Europe. But when Scottish King James ascended to the English throne in 1603, he brought the public’s attention to his own obsession with the occult. His book Daemonologie presented the idea of a vast conspiracy of satanic witches threatening to undermine the nation. Shakespeare wrote his play Macbeth, which presents the first depiction of a witches’ coven in English literature, in James I’s honour.

To curry favour with his monarch, local magistrates such as Roger Nowell read Daemonologie and, acting under its spell, sought to identify and prosecute witches in their communities. In 1612 Nowell arrested no fewer than twelve individuals from the Pendle region and even went to the far fetched extreme of accusing them of conspiring their very own Gunpowder Plot to blow up Lancaster Castle. Two decades before the more famous Matthew Hopkins began his witch-hunting career in East Anglia, Roger Nowell had set himself up as witchfinder general of Lancashire.

With these historical facts in mind, I tacked Booshka up one October morning and off we went, heading down the winding lane to Read Village. To access the grounds of Read Hall, one must go down a private road, but one that was also marked with a public footpath sign. I wasn’t sure if horses were allowed to go here or not, but decided to risk it. Miss Boo and I cautiously proceeded. There was nothing explicitly stating that one couldn’t ride a horse there.

About one hundred yards down this private road, my faithful steed and I encountered an archetypal Decent English Lady out walking her dogs. I asked her if it was okay if my pony and I continued down the road. She smiled in commiseration and said, “Go on, love! If anyone rushes out to shout at you, claim ignorance!”

My steed boldly stepped forward, only to shy a bit further down when we encountered a house with loud hip hop music blasting from the back garden. Clearly my mare is of delicate sensibilities and prefers the gentler strains of baroque music.

Nonetheless we persevered until we reached the end of the private road and entered the grounds of Read Estate. There was no gate or livestock grid to bar our access. While I couldn’t see any of Read Hall itself, as it was surrounded by a tall stone wall and thickly planted trees, both Miss Boo and I took surreptitious peeks into the dense greenery beyond that wall. We had gone about 50 yards down the tarmac path when we encountered rather unsubtle signage:

FOOTPATH ONLY, NO HORSES

Sadly we turned around and beat a hasty retreat. When we reached the house with the blaring hip hop, Miss Boo threw in a few gratuitous strides of trot.

Still, thanks to an anarchic but Decent English Lady, we at least captured a glimpse of Read Estate.
Posted by Mary Sharratt

I can think of no better way to do your historical research then on horseback! The horse was so intrinsic to the seventeenth (and other centuries!) way of life. I know I have always managed to almost completely "zone" into my imaginary world on horseback. Mind you it has been some years since I have ridden and I'm not sure the arthritc hip will take it these days.
Do you have anything on seventeenth century horse related information for future blogs? I would love to know about saddles, types of horses etc. In an early draft I put an Arab into the story, but it was quickly pointed out by my more knowledgeable critique partner that Arabs did not come to England until the 18th century. Ooops!

Hi - I've come to your blog by way of Judith James, who is a fellow chapter mate of my writers' group. Your upcoming book sounds fabulous. And how amazing that you could ride so close to your object of desire.

Fascinating blog, Mary. What a lovely way to place yourself in the place and time of your ovel setting. I love your horse, she has a beautiful face and her name is lovely too.
Anita

Such an interesting post. I started reading Hoydens and Firebrands recently and it is one of my favorite blogs to visit.