The Real Grinch Who Stole Christmas! 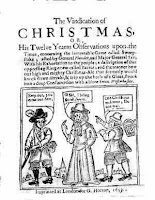 Of all the heinous offences laid at the feet of the puritans during the time of the Interregnum (1649-1660), the banning of Christmas raises the most interest. Oliver Cromwell is generally credited with this decision but the fact is that the abolition of Christmas (or “Christ’s Mass”) as a feast day and holiday predated Cromwell’s rise to power and was the outcome of the puritan domination of Parliament in the 1640s.
Christmas had always been celebrated in England with traditions predating Christianity itself eg the “holly and the ivy” goes well back into pagan times. The traditions of wassailing, carols, feasting, mummers, plays and the resultant general drunkenness, frivolity and idleness were not looked on favourably by the puritans who believed that not only was it pagan but also resounded with Roman Catholic undertones. The puritans believed in a pure (hence the name) form of worship and devotion, based on the scriptures and felt that even the reformation had not gone far enough. ( I am sure we will hear more about the puritans as this blog grows!)
In 1645, a “Directory of Public Worship” was produced in Westminster to replace the prayer book and in 1647 the parliament passed an ordinance abolishing the feasts of Christmas, Whitsun and Easter. In the 1650s this was taken further with a specific ordinance ordering shops and businesses to remain open on 25th December. Despite the ordinances and the threat of penalties (that included fines and being placed in the stocks) many people continued to covertly celebrate Christmas behind closed doors.
For an account of one family’s perilous decision to continue the practice of Christmas, see the diaries of William Winstanley. Winstanley was an Essex farmer who “believed it was the duty of all Christians to celebrate the birth of their Saviour, with joyous festivity and open-handed generosity towards friends, relations and more especially the poor." (Alison Barnes, author of William Winstanley: The Man Who Saved Christmas ).
In 1660 the monarchy was restored and the Christmas ban was lifted, although, not surprisingly, after 18 years it took some time for it to return to the familiar carousing and good cheer.
As we contemplate the “stress” of Christmas, is there, perhaps a pause for consideration that perhaps the puritans were not all that wrong and that a purer form of worship and remembrance of Christ’s nativity should have a place in modern society?
I would love to hear your thoughts…and in the meantime I would like to share a genuine seventeenth century recipe with you.
“LIBBY’S” CHRISTMAS PUDDING
250g flour
1 tsp nutmeg
250g suet
1 tsp cinnamon
250g dark (Barbados) sugar
250g each of sultanas, raisins, currants and mixed peel
250g grated new carrot
100 slivered blanched almonds
250g grated raw potato
1 large wineglass of brandy or sherry
3 or 4 tsp mixed spice
1. Mix all ingredients thoroughly and put in greased basins, covered with greaseproof paper and a cloth.
2. Steam for 8 hours.
3. Cool and change cloth.
4. Re-steam for 3 hours and serve with brandy butter, custard etc.
Notes: can be made not too long in advance and it can be frozen. It makes one large and one small wonderful, dark, very rich pudding!
For more information on:
Cromwell and Christmas
William Winstanley
A very safe and happy Christmas to our readers!
Alison (who is hoping that Christmas day will not be too hot!)
Posted by Alison Stuart